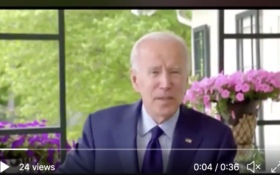 Say what you will about President Donald Trump — he’s fulfilling his 2016 promise to completely remake the political world in the United States.

Trump’s habit of giving his opponents nicknames has been a staple part of his media strategy since 2015 — and Biden just stole the idea.

Biden has a new nickname for Trump: “President Tweety.”

“Trump is out there tweeting again this morning. I call him ‘President Tweety!'” Biden said in a video message.

“Stop tweeting about it!” Biden added, referring to Trump’s tweets about reopening the country.

“Get the money out to Main Street now.”

Whether or not the nickname will stick remains to be seen.

If there was any Democrat willing to steal out of Trump’s playbook, it would be Biden.

Biden told Vanity Fair last week he’d been holding off on giving Trump a nickname. But Biden’s past statements prove he’s willing — and often eager — to get into nasty political mudslinging.

He has threatened to both fistfight the President and smack him in the mouth.

It’s safe to assume the 2020 election could become a bare-knuckle political brawl as November draws near.

Look no further than California House Speaker Nancy Pelosi, who this week teased Trump and falsely called him “morbidly obese.”

Trump’s doctors have repeatedly said the president is in “excellent shape.”

But facts don’t matter. The President has forced the Democrats to become desperate.

Because they know what November could bring: Another four years straight out of Trump’s political playbook..