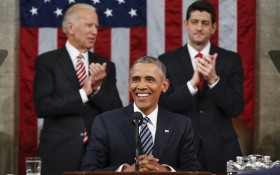 Joe Biden has spent most of his campaign committing gaffe after gaffe.

So when the 2020 hopeful appeared on The Late Show with Stephen Colbert, what came out of his mouth at first glance could’ve been interpreted as a bad joke.

But Biden insisted he was serious when he said, without question, that he’d nominate former President Barack Obama to the Supreme Court.

Biden and Host Stephen Colbert had been chatting presidential policy before the discussion turned to Obama. Colbert put Biden on the spot, asking him whether or not Biden would nominate his old pal to the highest bench in the land.

“Hell…” Biden said, taking some time to think about the question.

The pro-left crowd began to roar and Biden quickly caved.

“He was a constitutional professor at the University of Chicago,” Colbert said, cutting Biden off.

You can take a look at the exchange below:

Colbert: “Would you appoint him [Barack Obama] to the Supreme Court?”

They then quickly discuss his qualifications, indicating it wasn't a joke. pic.twitter.com/MnmzkNijUD

Of course, this wasn’t the first time that Obama’s name has swirled around a possible Supreme Court nod by a Democratic presidential candidate.

Former Secretary of State Hillary Clinton did the same back in 2016, when a fan gushed about the possibility of a Justice Obama.

Harvard Doctor: “There is no maximum human lifespan”  [Sponsored]

“Wow, what a great idea,” Hillary said in response. “No one has ever suggested that to me, I love that, wow.”

“I mean he’s brilliant, and he can set forth an argument, and he was a law professor, so he’s got all the credentials,” she continued.

How do you feel about the idea?

Do you want Obama to be installed as a Supreme Court Justice by a Democratic presidential candidate?

Or is this pandering at it’s worst?

Should Obama be the next Supreme Court justice?