Joe Biden STUNS everyone with abortion reversal - The Horn News 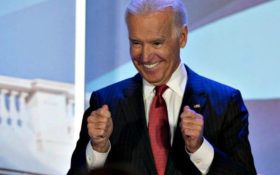 “If I believe health care is a right, as I do, I can no longer support an amendment” that makes it more difficult to kill babies, Biden said at a Democratic Party fundraiser in Atlanta.

The former vice president’s reversal on the Hyde Amendment came after rivals blasted him for affirming through campaign aides that he still supported the decades-old budget provision. The dynamics had been certain to flare up again at Democrats’ first primary debate in three weeks.

Biden didn’t mention this week’s attacks, saying his decision was about health care, not politics. Yet the circumstances highlight the risks for a 76-year-old former vice president who’s running as more of a centrist in a party in which some far-left activists openly question whether he can be the party standard-bearer in 2020.

“I’ve been struggling with the problems that Hyde now presents,” Biden said.

A Roman Catholic who has wrestled publicly with abortion policy for decades, Biden said he voted as a senator to support the Hyde Amendment because he believed that women would still have access to abortion even without Medicaid insurance and other federal health care grants and that abortion opponents shouldn’t be compelled to pay for the procedure. It was part of what Biden has described as a “middle ground” on abortion.

Now, he says, there are too many barriers that threaten easy abortions. Republicans keep pushing for an outright repeal of the Supreme Court’s 1973 decision that legalized abortion nationwide.

The former vice president, who launched his 2020 presidential campaign in April, said he arrived at the decision as part of developing an upcoming comprehensive health care proposal. He has declared his support for a Medicare-like public option as the next step toward universal coverage. He reasoned that his goal of universal coverage means women must have full and fair access to abortions.

Repealing Hyde has become a defining standard for Democrats in recent years, making what was once a more common position among moderate Democrats more untenable, particularly given the dynamics of primary politics heading into 2020. At its 2016 convention, the party included a call for repealing Hyde in the Democratic platform, doing so at the urging of nominee Hillary Clinton.

Republicans pounced, framing Biden’s change in position as a gaffe.