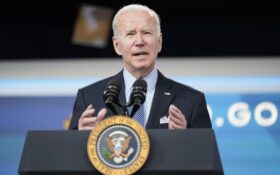 President Joe Biden wants to police what you think—or at least, what you say.

Biden announced that he’s forming a new Disinformation Governance Board—but he didn’t establish these “disinformation” police inside the State Department, which is focused on foreign affairs.

That’s what he’d do if he was really worried about Russian “disinformation” spreading to America.

Biden established the disinformation cops inside the Department of Homeland Security, which focuses on homegrown domestic threats.

That’s even more dangerous when you consider that Biden just said the most dangerous people in America are… people just like you (and me).

“This MAGA crowd is really the most extreme political organization that has existed in American history,” Biden said this week.

In case there’s any doubt in your mind, let the new disinformation czar clear it out for you.

Nina Jankowicz will head up the office in question—and she’s said you’re to blame for the fact that not everyone accepts liberal talking points as the Gospel truth.

In a 2020 article, she wrote that anyone can see disinformation is “an America pathology” when you compare enlightened people “who see systemic racism as a major problem and those who don’t. These divisions have been exacerbated by the COVID-19 pandemic, four years of Trump’s populist rhetoric, and a social media environment that encourages outrage and extremism.”

Joe Biden, she wrote, should respond by “creating a counter-disinformation czar within the National Security Council and setting up a corresponding directorate.”

Jankowicz knows about disinformation; she’s been the source of enough of it.

“Voters deserve that context, not a (fairy) tale about a laptop repair shop,” Jankowicz tweeted shortly before the 2020 election.

Since then, the federal government announced that it really is investigating Hunter Biden; The New York Times and a writer from Politico announced they have verified many of the e-mails on that laptop are authentic; and the owner of the repair shop, John Paul Mac Isaac, has publicly confirmed the “fairy tale.”

Jankowicz also praised the phony Steele dossier, which claimed Donald Trump hired hookers to pee on a bed where Barack and Michelle Obama had slept. It’s since been given up as a fraud.

She even praised the liar who cobbled the lies together: former British spy Christopher Steele, the main source of the anti-Trump Russiagate dossier in the 2016 election.

Jankowicz recommended a podcast by “Chris Steele (yes THAT Chris Steele),” because he “provides some great historical context about the evolution of disinfo. Worth a listen.”

Listened to this last night- Chris Steele (yes THAT Chris Steele) provides some great historical context about the evolution of disinfo. Worth a listen https://t.co/oQn5jS8tK8

Tweeting is only part of Jankowicz’s job. She likes to sing her deepest feelings, too.

“Who do I f**k to be famous and powerful?” she sang in one online video. “I want to be rich, famous, and powerful! Step on all my enemies and never do a thing.”

“Who do I fuck to be famous and powerful?!” #NinaJankowiczpic.twitter.com/NVSUWzzkil

She also did a parody of a famous Mary Poppins song about Russian “disinformation,” as well.

You can just call me the Mary Poppins of disinformation 💁🏻‍♀️ https://t.co/eGV9lpctYn pic.twitter.com/WVQFA2bPmq

She’ll fit in great at the Biden administration; if anyone is an expert on misinformation, it’s the current Democratic officeholder, his vice president, and their Cabinet henchmen.

Remember, Biden officials claimed that inflation would be “transitory.” When it kept rising, they said it would only hurt the ”high-class” rich, and then that it’s “actually a good sign” for our economy.

Biden’s DHS Secretary, Alejandro Mayorkas, claimed the administration had “effectively managed” the Mexican border. America’s “borders are not open,” he said with a straight face.

Now, they want to police what you say — not because they’re worried you might believe disinformation, but because they know you don’t buy their nonsense.

Conservative critics say it’s a huge step toward destroying your freedom and the U.S. Constitution.

“Plainly put, what the Biden administration is about with the creation of the DHS ‘Disinformation Governance Board’ is nothing less than the American version of what in 1933 so inspired Mussolini and his fascists — the Nazi ‘Reich Ministry for Popular Enlightenment and Propaganda,’” wrote Jeffrey Lord at The American Spectator.

Under this regime, “Incorrect political opinions become a national-security threat. The DGB already looks frighteningly similar to the KGB,” wrote Roger Koppl and Abigail Devereaux at the Wall Street Journal.

Any way you slice it, it’s anti-American nonsense.

And it’s aimed directly at censoring you and your loved ones.