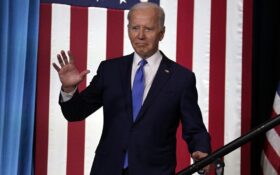 Down South, there is a humanitarian crisis on the U.S.-Mexico border as tens of thousands of illegal immigrants stream across the open border. Critics have called the unchecked tidal wave of immigrants an invasion of the United States.

Up North, there is a winter crisis. Dozens are dead and looting has broken out in the city of Buffalo after a massive icy blast covered millions of Americans in frost.

And in the sunshine and warmth of a Caribbean island, the “Big Guy” is probably sipping a rum cocktail without a care in the world.

During the major winter crisis gripping New York and other states, President Joe Biden has decided it’s a nice time for a luxurious vacation to St. Croix in the U.S. Virgin Islands.

Biden will be heading to St. Croix for a vacation. pic.twitter.com/kbriXiyL29

“The optics of this are horrible,” Michele Tafoya, a podcast host, said of Biden’s trip to the tropical island.

“Not only is it a vacation, but it’s somewhere warm and beautiful while others are freezing, literally, to death.”

“If I’m his team, I’m saying ‘you’re not going, sorry, you’re staying home and we are comforting the people of Buffalo,'” she said.

"Not only is it a vacation, but it's somewhere warm and beautiful while others are freezing, literally, to death," notes @Michele_Tafoya of Biden's trip to St. Croix as the death toll in New York climbs. "Mr. President, cancel your trip — it's not too late." pic.twitter.com/RRvcNfrsHN

Other critics said if former President Donald Trump were to vacation while two crises were happening at once, the mainstream media would be livid.

“If this were Trump or [George W. Bush], Dems would be drafting articles of impeachment,” one user claimed.

If this were Trump or GWB, Dems would be drafting articles of impeachment.

Biden is going on yet another vacation to St. Croix today. While the borders are in crisis. El Paso is overwhelmed with illegals flooding the streets & the city’s resources are being depleted. Inflation is in full force & he’s going to a beachfront property until past New Year’s

Where is @POTUS during this crisis? Vacationing in St. Croix. https://t.co/XmN4IW1p4T

Have a great time in St Croix, POTUS, while people are literally freezing to death in their cars and homes in Buffalo…