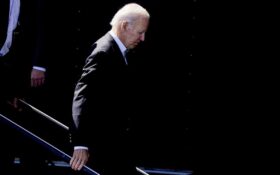 President Joe Biden says he intends to run for re-election, but he has yet to announce his campaign formally.

“Look, my intention, as I said, to begin with, is that I would run again. But it’s just an intention. But is it a firm decision that I run again? That remains to be seen,” Biden said on 60 Minutes in September.

“If I were to say to you, I’m running again, all of a sudden a whole range of things come into play that I have requirements to change and move and do… in terms of election laws, and it’s much too early to make that kind of decision.”

However, Biden may have just taken his first step.

Democrats voted Friday to remove Iowa as the leadoff state on the presidential nominating calendar and replace it with South Carolina starting in 2024, a dramatic shakeup championed by Biden himself. The Democratic National Committee’s rule-making arm made the move to strip Iowa from the position it has held for five decades after technical meltdowns sparked chaos and marred results of the state’s 2020 caucus.

Biden has struggled in Iowa during his past runs for president.

In 2008, he netted only 4 percent of the vote in Iowa’s Democratic caucus. In 2020, he finished fourth among Democrats, despite polling as the national frontrunner for more than a year.

However, Biden won South Carolina’s primary election by 28 points one month later that month, and he eventually won the nomination.

Given Biden’s electoral success in South Carolina, he’s setting up a hurdle for any Democrats aiming to challenge him in 2024.

The Republican National Committee has already decided to keep Iowa’s caucus as the first contest in its 2024 presidential primary, ensuring that GOP White House hopefuls — which include former President Donald Trump — have continued to frequently campaign there.

However, the Democratic National Committee already approved moving South Carolina’s primary to Feb. 3 and having Nevada and New Hampshire vote three days later. Georgia would go the following week and Michigan two weeks after that.

The move marks a dramatic shift from the current calendar, which has had Iowa holding the first-in-the-nation caucuses since 1972, followed by New Hampshire’s first-in-the-nation primary since 1920. Nevada and South Carolina have gone next since the 2008 presidential election, when Democrats last did a major overhaul of their primary calendar.

The changes will still have to be approved by the full DNC in a vote likely early next year, but it will almost certainly follow the rule-making committee’s lead.

The DNC also plans to revisit the primary calendar again before 2028 — meaning more changes could be coming before then.

Biden wrote in a letter to rules committee members on Thursday that the party should scrap “restrictive” caucuses altogether because their rules on in-person participation can sometimes exclude working-class and other voters. He told also told party leaders privately that he’d like to see South Carolina go first to better ensure that voters of color aren’t marginalized as Democrats choose a presidential nominee.

Four of the five states now poised to start the party’s primary are presidential battlegrounds, meaning the eventual Democratic winner would be able to lay groundwork in important general election locales. That’s especially true for Michigan and Georgia, which both voted for Donald Trump in 2016 before flipping to Biden in 2020. The exception is South Carolina, which hasn’t gone Democratic in a presidential race since 1976.

Scott Brennan, a rules committee member from Iowa, said “small, rural states” like his “must have a voice in the presidential nominating process.”

“Democrats cannot forget about entire groups of voters in the heart of the Midwest without doing significant damage to the party in newer generations,” Brennan said.

House Majority Whip Jim Clyburn, South Carolina’s lone congressional Democrat and one of Biden’s top supporters in Congress, said the president called him Thursday to inform him of his push to move his state up.

“He knows what South Carolina did for him, and he’s demonstrated that time and time again, by giving respect to South Carolina,” Clyburn said.

Still, the vote by the rules committee has faced serious pushback, with some states vowing to ignore the changes altogether. That’s despite the panel approving language saying states could lose all of their delegates to the party’s national convention if they attempt to violate new rules.