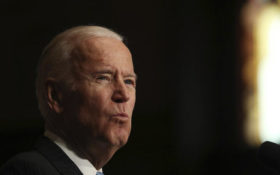 While Americans celebrate their freedom this Fourth of July, the 2020 Democatic presidential hopefuls are rolling out their unhinged plans to destroy the right to keep and bear arms.

They could shut down gun manufacturers, use triggers to gain users’ fingerprints, or even force gun owners to be implanted with a microchip.

In other words, former Vice president Joe Biden and his pals are declaring war on the gun owners that make-up middle America.

Make no mistake, leftists consider the Second Amendment their biggest obstacle to turning the United States into a Third World, socialist country. So, they put the Constitution in the crosshairs.

Biden, the supposed moderate, has called gun manufacturers “our enemy.”

After all, you can’t exercise your right to own a firearm is there are no firearms.

The first step to shutting down gun makers is forcing them to create a gun that would give the government the ability to spy on its owner, like something out of 1984.

Biden told a campaign rally last Thursday that “we should have smart guns. No gun should be able to be sold unless your biometric measure can pull that trigger.”

The Clinton administration tried to get Smith & Wesson to develop a “smart gun” in 1999, but the NRA sounded the alarm on how former Attorney General Janet Reno could use the technology to invade owners’ privacy.

But since then, a few “smart gun” models have gone into development…and they’re positively creepy.

Some “smart gun” triggers would read the user’s fingerprint—and if anyone other than the gun’s owner tried the pull the trigger, the gun would lock up.

Other versions force gun owners to implant a microchip into their body, which would match each person to his gun. Only someone with a government-mandated microchip could fire that gun.

Some companies dreamed up a gun that uses a GPS to track the gun’s owner and make sure he or she is in the same place as the gun before it can be used.

Yet another model would have a tiny camera that would use facial recognition software to “recognize” a user; any unrecognized person would be blocked from using the firearm.

What would the government do with all that biometric data?

Where would it be stored? Who could read it?

What information do Democratic politicians want to glean from microchips implanted in gun owners? No one wants to talk about it.

And how might government agents use a camera that’s inside the owner’s home 24/7?

The FBI admitted in 2013 that it had used remote administration tools (RATs) to hack into laptop computer cameras and spy on suspects without their knowledge.

Despite the ways this technology could be abused, Democrats across the country are hellbent on making gun companies create it.

New Jersey’s Democrat-controlled state legislature just passed a law that would force gun stores to carry at least one “smart gun”…just the moment one becomes available.

The state’s Democrat governor, Phil Murphy, is expected to sign the bill… and the former vice president is on board with that 100%.

“It’s within our right to” force gun companies to make “smart guns,” Biden said. “We can do that! Our enemy is the gun manufacturers.”

The rest of the Democratic pack can’t seem to take a breath without trashing the NRA and the Second Amendment.

Congressman Eric Swalwell, D-Calif., proposes a government “buyback” for so-called “assault rifles”—and people who refuse to sell at the government’s asking price would go to jail.

But that’s nothing compared to how far Swalwell is willing to punish people who cling to their constitutional rights.

He threatened to nuke his own country in order to kill people who refuse to turn over their guns.

And it would be a short war my friend. The government has nukes. Too many of them. But they’re legit. I’m sure if we talked we could find common ground to protect our families and communities.

Another sick part of Swalwell’s plan is to sue gun manufacturers for murders—like Colt, Smith & Wesson, or Remington pulled the trigger.

Democrats say guns are a “defective” product…but killing people is what they’re intended to do.

Which is more than Biden, Swalwell, and their ilk’s Big Brother gun control plans will ever do.