Joe Biden just called you a fascist - The Horn News 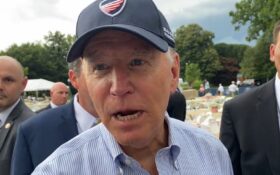 President Joe Biden called Republican “America First” voters to semi-fascists on Thursday as he led a kickoff rally and a fundraiser in Maryland 75 days out from the midterm elections.

Addressing a large crowd at Richard Montgomery High School in Rockville, Biden rambled at times and at others lost his train of thought. But the message was clear: Republicans are deplorable.

The events, in the safely Democratic-dominated Washington suburbs, were meant to ease Biden into what White House aides say will be an aggressive season of championing his policy victories and aiding his party’s candidates. Democrats have seen their hopes rebound amid the legacy-defining burst of action by Biden and Congress.

Ahead of the rally, Biden raised about $1 million at a small event with about 100 donors for the Democratic National Committee and the Democratic Grassroots Victory Fund in the backyard of a lavish Bethesda home.

After his speech at the rally, Biden lingered with the largely mask-free crowd for nearly 30 minutes, diving back into the style of campaigning that had been disrupted for Democrats for more than two years by the COVID-19 pandemic. The president, who was identified as a close contact of first lady Jill Biden on Wednesday when she was diagnosed with a “rebound” case of the virus, did not appear to wear a face covering as he posed for selfies and hugged supporters.

Biden’s Thursday events come a day after the president passed another huge spending initiative to forgive federal student loans for millions of borrows, a move that Democrats believe will animate voters.

Republicans, though, saw their own political advantage in the move, casting it as an unfair giveaway to would-be Democratic voters.

“President Biden’s inflation is crushing working families, and his answer is to give away even more government money to elites with higher salaries,” said Senate GOP leader Mitch McConnell. “Democrats are literally using working Americans’ money to try to buy themselves some enthusiasm from their political base.”

“What we’re seeing now is either the beginning or the death knell of an extreme MAGA philosophy,” Biden told donors at the fundraiser. “It’s not just Trump, it’s the entire philosophy that underpins the — I’m going to say something, it’s like semi-fascism.”

“Biden forced Americans out of their jobs, transferred money from working families to Harvard lawyers, and sent our country into a recession while families can’t afford gas and groceries,” said spokesperson Nathan Brand. “Democrats don’t care about suffering Americans — they never did.”

“MAGA Republicans don’t have a clue about the power of women,” Biden said in speech, noting the resonance of the Supreme Court Roe v. Wade ruling with women voters. “Let me tell you something: They are about to find out.”

However, Trump’s grip on the GOP remains strong and has perhaps even become tighter in the aftermath of the shocking FBI search of his Mar-a-Lago home.

Will voters respond and rally to Trump in November?