Joe Biden in DEEP trouble if this old footage gets out... - The Horn News 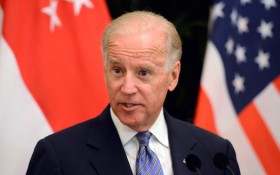 If Biden loses the Democratic nomination, it probably won’t be because he’s old, or because of his habit of kissing and sniffing women (and girls), or even because he’s an unaccomplished windbag.

The more dangerous thing for Biden is a mental condition: Joe Biden has a split personality.

Biden doesn’t just “have to answer for an occasional unorthodox position or statement,” that website said.

“Is Joe Biden a bold progressive,” it asked, or is he “an out-of-touch centrist dinosaur, waxing nostalgic about bipartisanship with segregationists”?

The problem with “these dueling, disparate narratives” is that “they’re both basically true.”

A new video—from not all that long ago—proves the point, and The Horn has got it for you.

If it goes viral, it’s big trouble for Biden.

Let’s remember what Biden has been saying on the campaign trail the last few years about the Democrats’ most important issue: amnesty for illegal aliens.

For years, Joe has supported open borders and giving taxpayer-funded services to the tens of millions who have entered our country illegally.

Just five years ago he told the U.S. Hispanic Chamber of Commerce that the “11 million people that are living in the shadows, I believe they’re already Americans citizens.”

That takes us to the Rotary Club in Columbia, South Carolina, on Monday, November 27, 2006.

Biden admitted a border barrier would keep out drugs, just like President Donald Trump has said.

“Unlike most Democrats—and some of you won’t like it—I voted for 700 miles of fence” along the Mexican border, Biden said.

And the reason “why I believe the fence is needed does not have anything to do with immigration as much as drugs.”

Then he went full-on Trump.

“People are driving across that border with tons—tons, hear me, tons!—of everything from byproducts for methamphetamine, to cocaine to heroin, and it’s all coming up through corrupt Mexico,” he said.

“Corrupt Mexico”? Trump could have written that line.

But here’s the kicker: Biden already had a terrible record on immigration before he tried to talk tough in 2006. He backed illegals most of his career.

The year that he gave that speech, the U.S. Border Control rated Biden’s Senate voting record on immigration a pathetic eight percent.

It would be one thing if Biden just flip-flopped for political reasons once, or on one issue—but he was on every side of the issue at the same time.

“When it comes to issues like abortion,” the Catholic Biden said, “I’m about as liberal as your grandmother.”

And in 1982, he voted for a bill to let states overturn Roe v. Wade—but then turned around and voted no on the exact same bill the next year. At the same time, he’s voted in favor of bills supporting Roe, and for measures to ban certain other kinds of abortions and promote others.

Or take his view of crime. In 1994 Biden used the same term Hillary Clinton did for street criminals: “predators.”

In the same speech, Biden warned of dealing with the "cadre of young" people without "conscious developing" that would become "predators" that were "beyond the pale" who would have be taken out of society. https://t.co/JA8WJAUAZC pic.twitter.com/NC0mJSenrn

But in 2012, he told a black audience that Republicans are “gonna put y’all back in chains.”

He once said he “would be honored to run with, or against, John McCain”–that he’d run as McCain’s vice president…then in 2008, he attacked McCain personally.

He said in March that he has “the most progressive record of anybody running” for president; then he criticizes Bernie Sanders for being a socialist.

How can he think all these things at once? Biden let the cat out of the bag during an interview way back in 1974.

“I used all the issues from busing to the war to the economy, crime, and prison reform…to convince the people that I was intelligent,” he said.

Where does Joe Biden stand—what does he believe, what would he do?

It doesn’t matter. It just matters that you think he sounds smart.

But standing on both sides of every issue since the Nixon administration doesn’t make you sound smart—it makes you sound shameless, desperate, and deranged.

Who knows which one of his personalities will show up in the Oval Office if he wins?