Joe Biden should be arrested for this... - The Horn News 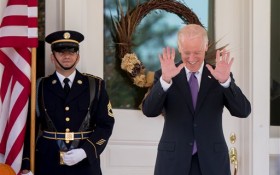 But this week, Biden crossed the line — and critics claim what he said could be illegal.

Biden is no stranger to controversial statements. In the past month, the former Vice President has been accused of plagiarism, several women alleged that he touched them inappropriately without their consent, and he praised himself for working with two Democratic Senators who supported segregation.

Now, Biden is threating to physically assault President Donald Trump — he says been fantasizing about it for some time.

Federal law clearly states that “any threat to take the life of or to inflict bodily harm upon the President of the United States” is a felonious offense.

While speaking with CNN, host Chris Cuomo asked Biden about Trump’s rhetoric and ability to go after his political opponents. Rather than say he would beat Trump with better ideas or policies, Biden said Trump is a “bully” that he wanted to “smack” in the mouth.

“Sure it worries me, in the sense that I’m looking forward to this, man. You walk behind me in a debate, come here, man. Don’t you think — you know me too well. The idea that I’d be intimidated by Donald Trump? He’s the bully that I knew my whole life,” Biden began.

After struggling to deliver a coherent sentence and saying the word “man” several times, Biden then threatened the president.

Biden continued, “But I think the American people want a president who has some dignity, who has a value set, who is actually trying to restore the soul of this country so when they turn on the television they look up and their kids say, ‘I want to be like that guy or that woman.’”

Joe Biden says he's looking forward to a chance to "slap @realDonaldTrump in the mouth" during a presidential debate.

"You walk behind me in a debate, come here, man. You know me too well. The idea I’d be intimidated by Donald Trump? He’s the bully that I knew my whole life." pic.twitter.com/QaDVHlSM50

This isn’t the first time Biden has threatened the President of the United States. The Delaware liberal has a long history of threatening Trump.

While campaigning for Hillary Clinton in October 2016, Biden threatened to take then-candidate Trump behind the gym and rough him up.

“The press always asks me, don’t I wish I were debating him? No, I wish we were in high school, and I could take him behind the gym. That’s what I wish,” Biden said at Wilkes University in Pennsylvania.

In March 2018, Biden was asked about the 2005 Access Hollywood tape, where Trump made lewd comments.

Biden told the crowd that he would have “beat the hell out of him” if they were in high school.

“They asked me would I like to debate this gentleman, and I said no. I said, ‘If we were in high school, I’d take him behind the gym and beat the hell out of him,'” Biden said during an event at the University of Miami.

It’s a felony to threaten the president of the United States – and Biden is on record doing it three times.

In the end, it may not matter. Biden’s 2020 campaign has been hit with one disaster after another.

Just before he threatened to hit the president of the United States in the face, Biden was slammed by just about everyone for boasting about how proud he was to work with two racist, pro-segregation Democratic Senators back in the 1970s.

In June, Biden used a campaign stop to rant about how he wanted to start a “real physical revolution” and would use “brass knuckles” if the Republican-controlled Senate refused to pass his agenda as commander-in-chief.

“There are certain things where it just takes a brass knuckle fight,” Biden began, detailing his sick fantasy.

“Or let’s start a real physical revolution if you’re talking about it because we have to be able to change what we’re doing within our system,” Biden added.

Aside from the 2020 campaign, Biden clearly has some unresolved bullying issues — and perhaps some time in the county jail could help him clear his head.