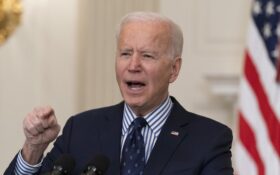 He’s actually the biggest segregationist since George Wallace, according to a one congressman.

Biden’s so-called “COVID-19 relief bill,” the American Rescue Plan, doles out money to farmers according to their race.

Rep. Burgess Owens, R-Utah should know. He comes from generations of black families who lived under segregation in the South.

Owens’ grandfather was a farmer. His father left Texas for Ohio for a chance to succeed in an integrated environment.

Burgess Owens was born in Columbus but moved to Tallahassee, Florida, where he was one of the first four black football players to integrate an all-white football team… and there was no question who the stand-out was.

Owens went on to play for the New York Jets and won his Super Bowl ring in 1981 with the Oakland Raiders.

Last November, at the age of 76, he was elected to his first term in Congress from Utah — as a Republican.

He’s lived the American dream… and he says Joe Biden is taking the country backward to the dark, ugly days we just escaped during his lifetime. The American Rescue Plan’s enormous spending includes $5 billion in set-asides for black farmers — and only black farmers.

Biden’s Secretary of Agriculture, Tom Vilsack, said Americans must “do everything we can to root out whatever systemic racism and barriers may exist at the Department of Agriculture,” by discriminating based on race.

Part of rooting out “systemic racism” means handing out money to some races and not others, he explained.

For example, one measure in the bill gives $4 billion to minority farmers to let them pay off 120% of their actual debt; it gives them more money than they need, as well as another $1 billion for training opportunities to get even further ahead.

That idea came from a bill introduced by Sen. Raphael Warnock, D-Ga., newly elected during a run-off election in Georgia in January.

But this is just one part of Biden’s race-focused agenda.

The other half of the Biden-Harris administration, Kamala Harris, explained in a campaign video that they were finished promoting equality before the law. The new administration would promote “equity”… which means discriminating in favor of minorities.

Burgess Owens, a conservative black Republican elected from Utah, says this is all immoral, and illegal.

“Racism was and will always be wrong,” he said.

He said he felt “deeply concerned” that Congress and the Biden-Harris administration “feels emboldened to perpetuate a modern-day form of racial segregation.”

Instead, they should “provide relief to those who need it most,” regardless of the color of their skin.

The whole episode reminded him of his own family’s struggle against real institutional racism.

“My grandfather, a respected farmer in the 1950s and ’60s black middle class, would be mortified by any policy that seeks to discriminate based on race,” said the freshman congressman.

Owens isn’t just sitting back, making tough statements as his country slips back into Jim Crow.

He and Wisconsin Republican Tom Tiffany have introduced a bill to put an end to racist discrimination against any group and treat all U.S. citizens fairly.

The proposal would ban the federal government “from discriminating or providing preferential treatment to any person on the basis of race, color, national origin or sex,” The Washington Times reported.

Tiffany said that helping “some farmers but not others based on race undermines the Constitution’s guarantee of equal protection for all Americans.”

“If we are serious about ending discrimination in the agriculture sector, the first step is for the government to stop doing the discriminating.” Tiffany added.

Under their bill, all Americans would compete on a level playing field. When that happens, the best man always end’s up in the winner’s circle — something Owens knows better than anybody.