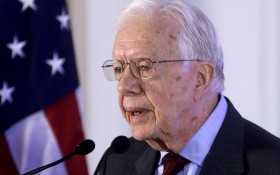 Former US President Jimmy Carter has cancer, and sadly his prognosis isn’t very good. Carter announced Wednesday that a recent liver surgery found cancer that has spread to other parts of his body.

Determining what treatment to pursue for former President Jimmy Carter’s cancer will depend on its type, its origin and factors such as age and health, doctors said.

“I will be rearranging my schedule as necessary so I can undergo treatment by physicians at Emory Healthcare,” Carter said in the statement released by the Carter Center in Atlanta.

The statement indicates that the 39th president’s cancer is widespread but not where it originated, or even whether that is known at this point. The liver is often a place where cancer spreads and less commonly is the primary source of it.

Carter has a family history of pancreatic cancer. He wrote in his memoir that his father, brother and two sisters all died of the disease and said the trend “concerned” the former president’s doctors at Emory.

The first task is to determine whether the cancer is curable, “which is unlikely with metastatic cancer,” or if it is possible to meaningfully prolong the life through surgery or other treatments, said Dr. Lodovico Balducci, a specialist on treating cancer in the elderly at the Moffitt Cancer Center in Tampa. “Cancer in a 90-year-old is a serious problem, but that does not mean a 90-year-old cannot benefit from treatment.”

Carter’s statement said further information will be provided when more facts are known, “possibly next week.”