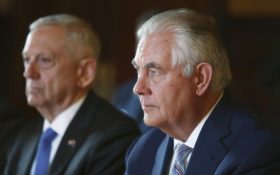 President Donald Trump’s national security brain trust faces Congress on the need for a new war authorization as the deadly ambush in Niger is igniting a push among many lawmakers to update the legal parameters for combat operations overseas.

Defense Secretary Jim Mattis and Secretary of State Rex Tillerson are scheduled to testify before the Senate Foreign Relations Committee on Monday. They told the panel behind closed doors three months ago that a 2001 law gave the military ample authority to fight terrorist groups.

But that’s a position that won’t wash with a growing number of congressional Republicans and Democrats, many of whom were startled by the depth of the U.S. commitment in Niger and other parts of Africa. They’ve argued that the dynamics of the battlefield have shifted over the past 16 years and it’s well past time to replace the post-Sept. 11 authorization with a law that reflects current threats.

Sen. Tim Kaine, D-Va., said last week he believed most Americans would be surprised by the extent of the operations in Africa that U.S. forces are involved in. Kaine and Sen. Jeff Flake, R-Ariz., are sponsoring legislation to install a new war authority for operations against the Islamic State group, al-Qaida and the Taliban.

“I don’t think Congress has necessarily been completely kept up to date and the American public, I think, certainly has not,” Kaine said after leaving a classified briefing conducted by senior Pentagon officials on the assault in Niger that killed four American soldiers.

Roughly 800 U.S. service members are in Niger as part of a French-led mission to defeat the extremists in West Africa. There are hundreds more American forces in other African countries.

U.S. troops also are battling an enemy — Islamic State militants — that didn’t exist 16 years ago in a country — Syria — that the U.S. didn’t expect to be fighting in. Nor did the 2001 authorization anticipate military confrontations with the Syrian government. Trump in April ordered the firing of dozens of Tomahawk missiles at an air base in central Syria and American forces in June shot down a Syrian Air Force fighter jet.

Beyond that, Trump approved a troop increase in Afghanistan, the site of America’s longest war, and the U.S. backs a Saudi Arabia-led coalition carrying out airstrikes in Yemen.

“As we face a wide array of threats abroad, it is perhaps more important than ever that we have a sober national conversation about Congress’ constitutional role in authorizing the use of military force,” Sen. Bob Corker, R-Tenn., the committee chairman, said in a statement.

But previous attempts to ditch the old authorization and force Congress to craft a new one have failed. Democrats in the House complained that Speaker Paul Ryan used underhanded tactics after an amendment was stripped from a military spending bill that would have repealed the 2001 war authorization 240 days after the bill was enacted. Proponents of the measure said eight months was enough time to approve new war authority.

GOP leaders said voting to rescind existing war authority without a replacement in hand risks leaving U.S. troops and commanders in combat zones without the necessary legal authority they need to carry out military operations.

A similar effort in the Senate led by Sen. Rand Paul, R-Ky., also came up well short. Paul, a member of the committee and a leader of the GOP’s noninterventionist wing, has accused his colleagues of surrendering their war-making power to the White House.