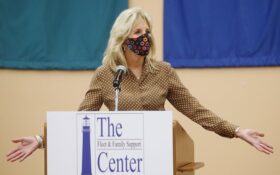 First lady Jill Biden commemorated Arbor Day by planting a linden tree on the north lawn of the White House.

She strode out Friday in a skirt and a double-breasted blazer and put three shovelfuls of dirt around the awaiting tree.

“Who doesn’t plant trees in high heels?” she said.

Biden said that the family’s cat would be coming to the White House “pretty soon.” The first lady told NBC News in an interview broadcast Friday that the younger of the Bidens’ two German shepherds, Major, was being trained for the arrival of the cat. Major has been involved in two biting incidents as President Joe Biden and the first lady have gotten settled into the White House.

“That was part of his training,” she told NBC News. “They took him into a shelter with cats. He did fine.”

The president was asked during the televised interview if the cat was his idea.