Jill Biden opens up about her role: "It's uncomfortable" - The Horn News 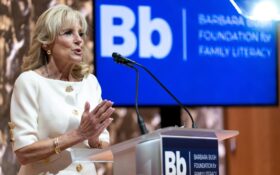 Jill Biden spoke candidly Wednesday about the challenges of her job as first lady and the unexpected scrutiny she’s experienced in a position she never imagined having when she was young.

Speaking at an event for the Barbara Bush Foundation for Family Literacy at the Kennedy Center, Biden offered tribute to Barbara Bush and her ability to handle controversy with grace.

She said she has learned a similar lesson: “There are times when the role of first lady pushes you to show up, even when it’s uncomfortable.”

Biden recounted how she’s now visited 32 states as part of the administration’s vaccination campaign, her focus on child poverty and education, and “to listen to people who have often been ignored.” When asked why she visits red-leaning states like Mississippi, Alabama and Alaska, where she knows she’ll be met with opposition, she said: “I am their first lady, too.”

“There have been times when I’ve been met with hurt, or anger. But I found that that common values that unite us are deeper than our divisions,” Biden said. “I’ve seen how a kind word or gesture can, you know, just relax someone’s shoulders a bit. Can open their hearts to what you have to say, even if we’ll never agree.”

Biden has been one of the administration’s most prominent and prolific surrogates, frequently traveling outside of Washington on her own, and occasionally with President Joe Biden, to encourage Americans to get vaccinated. A teacher herself, she also often visits schools to push the Biden administration’s proposed investments in education.

The role of surrogate is not a new one for Biden, as she advocated for military families during her husband’s time as vice president, and was a frequent fixture on the trail during the 2020 campaign. But she said that although she visited the White House as the vice president’s wife, “there’s nothing that can prepare you to be first lady.”

“We aren’t elected, we have to define this role for ourselves. And we are thrust into a national spotlight in a way that I know none of us could have anticipated,” she said.

Biden recounted a moment that scrutiny hit home, when she went to a bakery to buy Valentine’s Day cupcakes and, to her surprise, her decision to wear her hair in a scrunchie made national news.

“As first lady, everything you do or say carries more weight. And while that can be intimidating at times, it’s also what makes the role so special,” she said.

Biden also spoke about her surprise and awe at ending up in such a position of power after growing up “spending my summers watching Phillies baseball games, and waitressing at the Jersey Shore to make money for college.”

“I could never have imagined where my life would take me. That one day I would eat dinner on the China that Bess Truman picked out so many years ago,” she said, or “wake up, just surrounded by priceless pieces of history.”