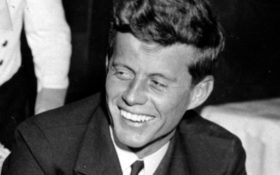 Former President John F. Kennedy was known for his scandalous rendezvous with women other than his wife Jackie — and a new story has emerged that details previously unknown foreign debauchery.

In May 1961, the most powerful man in the world went door-to-door in the streets of Paris, searching for a French call girl that had agreed to meet him in secret.

Kennedy had used the excuse of a doctor’s appointment to sneak out to an arranged affair while in Paris for a crucial summit. The woman he was after was considered a look-alike to his wife.

The tale of the shady plan is detailed in the new book, “Madame Claude: Her Secret World of Pleasure, Privilege, & Power,” by William Stadiem.

Claude was one of the most successful madams in the world back then. She ran a prominent prostitution ring full of gorgeous, upscale women catering to the world’s richest and most powerful men.

“A date with a ‘Claude girl’ was one of those pinnacle Paris experiences,” writes Stadiem, “like staying at the Ritz or dinner at Maxim’s or wearing a Lanvin suit . . . an apotheosis of luxury that the French do better than any other nationality.”

Kennedy’s seedy liaison had to be so well-planned out that it was compared to a political summit.

After the Bay of the Pigs disaster in 1961, Kennedy decided he needed to redeem himself by embarking on a European tour with his wife to meet with French and Soviet leaders. Jackie was so captivated by the French that Kennedy famously introduced himself as, “the man who accompanied Jacqueline Kennedy to Paris.”

While Jackie was bewitched by her European tour, her husband was off on his own dirty adventures.

“If JFK had a type, it was the wholesome, snooty, proper, preppy girl whose flaunted untouchability he could violate . . . girls like Jacqueline Bouvier,” writes Stadiem, noting Kennedy learned about Claude from Sinatra.

“Here was a madam who specialized in exactly what JFK was after.”

Kennedy’s press secretary Pierre Salinger arranged Kennedy’s secret liaison with the help of Madame Claude, who originally turned him down in the fear of something going wrong if the president was caught with her prostitutes.

Salinger convinced Claude that any scandals that could potentially erupt would be beneficial to her business, bringing her plenty of attention.

“‘Rise to the occasion,’ Salinger exhorted Claude. ‘Do it for your career. Do it for your country,’ he riffed, paraphrasing JFK’s inaugural address. ‘Think big!’ ” Stadiem writes. “Weighing risks and rewards like the shrewd banker she might have otherwise been, Claude decided to go for it.”

Kennedy picked French actress and Jackie lookalike Anouk Aimee, and Stadium writes the president was “obsessed with her.”

“What does he want her for? He’s already got her,” Claude, referring to Aimée’s resemblance to the president’s wife, asked Salinger.

“The explanation was that JFK liked the package more than the contents,” Stadiem writes. “He was drawn to Jackie’s looks but wanted a more seductive, sexual version.”

Aimee was disgusted with Kennedy’s offer and rejected it immediately, explaining she thought of Kennedy as a “puerile warmonger.” Claude lied to Salinger and told her that Aimee was away on business, rather than explaining Aimee was not interested.

Claude continued to search for a suitable woman for the president, and a month prior to the summit, Salinger and Kennedy tried to determine the best way to fit the rendezvous into their one hour window. They even created a code phrase, speaking about “buying Jackie a gift saddle at Hermes.”

“If the world had any idea how much of his time was focused not on NATO or Algeria or Vietnam, but on a hot date from Madame Claude, the perception of history would have been dubious, to say the least,” Stadiem writes.

Eventually, Claude determined that a 23-year-old Sorbonee graduate who worked as a fitting model for Givenchy was the dream date for Kennedy.

The secret rendezvous was scheduled to take place at the young woman’s apartment.

Kennedy was visiting supposed to visit French historical sites the day of and last minute claimed he had a bad back and needed to visit a French pain specialist.

In reality, Kennedy brought his doctor, the infamous Max Jacobson and the pair set off to find his new mystery lover only to end up at the wrong apartment.

The president gave a few old ladies the shock of their lives when he came banging on their door. He eventually determined he had the wrong address and went to a nearby cafe to use their pay phone.

Once he realized the pay phone required tokens, he decided to “slither up the narrow, curving stairwell and abashedly request a token from the grizzled bartender, who gave him the most curious and dubious of looks,” Stadiem writes.

“Neither he nor Dr. Jacobson had any francs. JFK had no money at all. Jacobson fished out a twenty-dollar bill and gave it to the barman, who seemed mystified. The doctor motioned for him to keep the change.”

Kennedy got a hold of Sallinger who regrettably wrote the wrong address down for the president — it should have read “rude de Courcelles” — instead he wrote “boulevard de Courcelles.”

Once corrected, Kennedy found his mystery girl, and then the rest of his European trip ended in a success. He held his own and many attribute this to his secret liaison with his mystery French call girl.