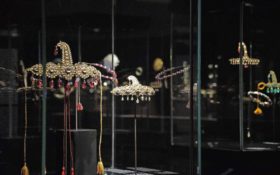 Thieves have stolen precious Indian jewels from the famed Al Thani Collection that were on exhibit at Venice’s Doge’s Palace — right in the middle of the show.

News reports say the thieves grabbed a golden, jeweled brooch and a pair of earrings Wednesday and escaped by blending in with the crowd. They’d studied the exhibit and figured out how to delay the triggering of the alarm.

The exhibit, “Treasures of the Mughals and the Maharajas,” was due to close Wednesday at the Palazzo Ducale, one of Venice’s top museums on the edge of St. Mark’s Square.