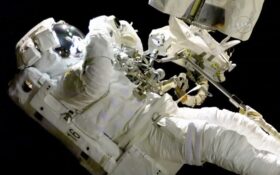 The FBI is investigating what one commercial airline pilot said might have been an airborne person with a jetpack, high in the busy skies near Los Angeles International Airport.

The Los Angeles Times reported that the Boeing 747 pilot radioed to report “a possible jetpack man in sight” at around 6:12 p.m. Wednesday, according to a recording from the website LiveATC.

The pilot spotted an object that might have resembled a jetpack 15 miles east of LAX at 5,000 feet altitude, a Federal Aviation Administration spokesperson told the newspaper. “Out of an abundance of caution, air traffic controllers alerted other pilots in the vicinity.”

“Use caution, the jetpack guy is back,” said one air traffic alert.

“Did you see a UFO?” one air traffic controller asked a pilot.

“We were looking but we did not see Iron Man,” the pilot responded.

The FBI is working with the FAA to investigate the report, FBI spokesperson Laura Eimiller told the Times in an email. The agency has already looked into three other possible jetpack in the skies above Los Angeles, and has “not been able to validate any of the reports,” she said.