TV’s Jerry Springer is becoming a judge!? - The Horn News 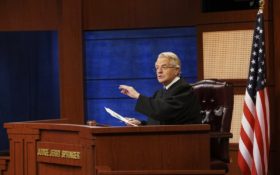 Hopefully there won’t be any chairs in this courtroom.

Talk show host Jerry Springer is getting a new TV role as “Judge Jerry,” where he’ll hear testimony and render verdicts before a studio audience. NBC Universal Television Distribution announced the half-hour court program Monday that will debut in national syndication in the fall of 2019.

The 74-year-old TV host is best known for “The Jerry Springer Show,” in which guests loudly, and at times violently, meted out their own brand of justice over 27 seasons. Springer started his career as a lawyer in Cincinnati.

In a statement, Springer says he’ll be called “honorable” for this first time in his life. He says his career is “coming full circle.”

“Judge Jerry” will be taped in Connecticut.