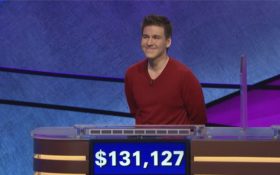 There’s no truth to the rumor that James Holzhauer is a cyborg created to be the perfect “Jeopardy!” contestant.

But given how he’s made a level of excellence rarely seen on the television quiz show appear almost mundane, it sometimes seems that way. Holzhauer eclipsed the $1 million mark in winnings Tuesday on his 14th appearance. Not only has he won $131,127 to shatter the program’s previous one-day record of $77,000, he already has the top five one-day scores in the history of a game that has aired regularly since 1984.

The professional gambler from Las Vegas is quick on his feet and quick with the buzzer, displays an extraordinary breadth of knowledge and — true to his profession — is cold-blooded in his willingness to risk big sums of money.

The show’s most hallowed records, set in 2004 when Ken Jennings won 74 games in a row and earned more than $2.5 million, seem like a plausible goal.

Like most of the game’s best players, he did his share of studying in advance, finding that books geared to young people were a good way to learn about unfamiliar topics. He built a replica of the show’s buzzer and practiced while playing along on TV, standing in his living room like he has to do now in front of a podium. Holzhauer says he rarely guesses — he doesn’t like those odds — but seems never to have forgotten a fact.

“My goal was just to be less nervous than the other players,” he said. “Whenever I felt overwhelmed, I snapped my fingers three times and pictured a fun snow festival with my daughter.”

He did have one audacious goal: to honor his daughter by winning $110,914 in a single episode, since her birthday was Nov. 9, 2014. He accomplished that on his fourth show.

His strategy is to begin games with the highest-value clues, hoping to quickly build winnings and land on the one “Daily Double” in the first round. When he does, he usually bets everything, punctuating it with a motion that makes it seem like he’s pushing in all his chips. If he’s wrong, there’s enough time to earn more money. But he’s rarely wrong.

The two “Daily Doubles” in the game’s second round are also coveted. He doesn’t bet everything then, but he puts a lot on the line.

Holzhauer said show host Alex Trebek once told him that he doesn’t gamble because he could win $1,000 and not care, but that losing $20 annoys him.

“I’m not surprised that most contestants don’t gamble the way I do,” he said. “Loss aversion is a very real factor.”

The Final Jeopardy round gives him one more chance to place a big bet. On the show that aired April 17, Holzhauer bet $60,000 on the category of 20th Century literary figures. The clue was: His first name refers to the ancient district in which you’d find the Greek capital; his surname is a bird.

He correctly answered: Who is Atticus Finch?

“Most ‘Jeopardy!’ players never think about maximizing winnings,” Jennings said. “I never did. I just wanted to survive the game and get to play again. But he’s a sports bettor. Maximizing winnings is everything to him. I wouldn’t have the stomach to bet $60,000 on a Final Jeopardy clue. What if you get that wrong, and you have to come back in five minutes and play another game knowing that you just blew a year’s salary on a single trivia question? Psychologically, I doubt that I could have rattled off a long streak doing that. But James just seems to be made for those dangerous plays. He’s a cool customer.”

Jennings can envision future players trying to imitate Holzhauer’s strategy of building up big winnings fast. But in a lesser player, that could be disastrous.

“I’m not sure I can really bet any more boldly than I have already,” Holzhauer said. “I can keep my foot on the accelerator, though.”

For a show with a long history, his single-day achievements beg for some perspective. Consider it this way: It’s like a young Major League baseball player hitting 95 home runs in a season (the record is 73 by Barry Bonds), then following it up with a couple of seasons in the 80s.

Holzhauer often watches with friends as his streak plays out on weekday evenings (shows are taped well in advance). “People seem to think it is really cool to watch someone on TV while you’re sitting next to them,” he said.

He hopes his celebrity stays low-key. He gets recognized in public now but said most people are respectful, save one fan “who got a little too handsy with my bicep” at a hockey game.

With his style of play, Holzhauer considers Jennings’ earnings record a more achievable goal than the 74-game winning streak. Given the show’s schedule, which includes tournaments and reruns, fans wouldn’t know until September if he approaches the standard of consecutive shows. Since the show’s ratings are already spiking, producers won’t mind if he sticks around.

“I’ve been waiting 15 years for someone to make a run at me, and it’s finally happening,” Jennings said. “The closer he gets to the cash and game records, the closer I will be watching. I’m rooting for the guy.”