Jen Psaki video comes back to haunt her - The Horn News 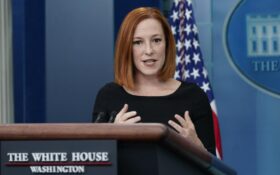 Former White House press secretary was very clear in this video: President Joe Biden simply cannot forgive or cancel $10,000 worth of student loan debt without a bill from Congress.

It would only be legal to forgive $10,000 in student loans if Congress sent Biden a bill, Psaki said.

Now that Biden did that without congressional approval, this 2021 video has come back to haunt her.

“What about President Biden’s campaign to forgive or cancel $10,000 in student debt,” a reporter asks her in the video. “What is the message to those people who feel he has yet to follow through on that?”

“If Congress sends him a bill, he’s happy to sign it,” Psaki replies forcefully, implying that the president can’t legally forgive the debt alone. “They haven’t sent him a bill on that yet.”

But don’t take Psaki’s word for it.

What about the third most powerful government official, the Speaker of the House?

“People think that the President of the United States has the power for debt forgiveness. He does not,” Pelosi explained. “He can postpone. He can delay. But he does not have that power [to forgive debt]. That has to be an act of Congress.”

“The President can’t do it,” she said. “So that’s not even a discussion. Not many people realize that. But the president can only postpone and delay, not forgive.”

PELOSI: "People think that the President of the United States has the power for debt forgiveness. He does not… The President can’t do it. So that’s not even a discussion." pic.twitter.com/E1AH0YxTFZ

Do you expect either Psaki and Pelosi to stick to their positions and condemn the Biden administration for its illegal attempt to bypass Congress?