Jen Psaki didn't like this question - The Horn News 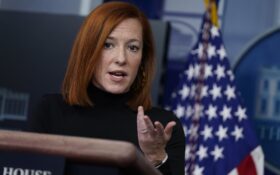 On Monday, Tesla CEO Elon Musk successfully negotiated a deal to buy Twitter, according to a bombshell report by the Wall Street Journal.

Now a privately owned company, Twitter may or may not reinstate the account of former President Donald Trump after banning him in January 2021.

Not everyone is happy about it. Even White House press secretary Jen Psaki has commented on Musk’s deal at a press conference — and implied the White House was prepared to fight back against Musk’s “free speech absolutist” take.

According to the transcript, one reporter asked, “Just a quick one on the breaking news: Twitter agreeing to let Elon Musk purchase — make his — go through with this purchase. Do you have a response to that? And does the White House have any concern that this new agreement might have President Trump back on the platform?

Well, I’m not going to comment on a specific transaction. What I can tell you as a general matter: No matter who owns or runs Twitter, the President has long been concerned about the power of large social media platforms, what they ha- — the power they have over our everyday lives; has long argued that tech platforms must be held accountable for the harms they cause. He has been a strong supporter of fundamental reforms to achieve that goal, including reforms to Section 230, enacting antitrust reforms, requiring more transparency, and more. And he’s encouraged that there’s bipartisan interest in Congress.

In terms of what hypothetical policies might happen, I’m just not going to speak to that at this point in time.

In other words, Psaki implied the White House could look into reforming Section 230 of the Communications Decency Act… if Twitter turns against them.

“Section 230” trended on Twitter after Psaki’s remark. The law states, among other things, “No provider or user of an interactive computer service shall be treated as the publisher or speaker of any information provided by another information content provider.”

It was amended in 2018 to make an exception for online sex trafficking.

Take a look at Psaki’s remark —

The Biden installation is only concerned with social media platforms that they don't control. President Trump wanted to reform section 230 and 99% of Democrats voted no. The MSM propaganda machine and the Democratic party is in full panic mode. pic.twitter.com/LwkIBZjxwl

Other Democrats have spoken more explicitly about their fears that Twitter could be bad for them politically.

“Now, Trump will use Twitter to do far more damage to regain power in 2022 and 2024 while Elon Musk has given no indication that he will do anything to stop him,” Mary Anne Marsh, a veteran Democratic strategist, told CNBC on Monday.

“It’s not good” for the Democrats, another strategist told the network.

Sen. Elizabeth Warren, D-Mass., called Musk’s deal “dangerous for our democracy,” although she left out any mention of Trump.

This deal is dangerous for our democracy. Billionaires like Elon Musk play by a different set of rules than everyone else, accumulating power for their own gain. We need a wealth tax and strong rules to hold Big Tech accountable.

The site has also banned some less political users, like the musician Azealia Banks. Plus, the left-wing activist Daniel Sieradski claimed to have banned in 2017, according to The Forward‘s review of a Facebook post by Sieradski.