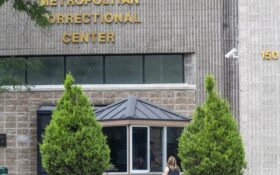 Inside the notorious federal jail in Lower Manhattan, small chunks of concrete fall from the ceiling. Freezing temperatures force inmates to stuff old coronavirus face masks into vents to try to stop the cold air.

One cell is off-limits because the door is now unstable — likely because of constant pounding over the years from the prisoners inside on the cinder-block walls.

Once hailed as a prototype for a new kind of federal jail and the most secure in the country, the Metropolitan Correctional Center has become a blighted wreck, so deteriorated it’s impossible to safely house inmates. The Justice Department said last month it would close the jail in the coming months to undertake much-needed repairs – but it may never reopen.

The Associated Press was granted rare access inside — the first time a reporter has toured the facility since wealthy financier Jeffrey Epstein killed himself there in August 2019. His death exposed a slew of problems inside the jail, and that list has only grown: rampant spread of the coronavirus, recording of squalid conditions, a loaded gun smuggled in, another inmate’s death.

The Metropolitan Correctional Center has housed a slew of well-known criminals — El Chapo, John Gotti, Bernie Madoff, and some of the world’s most dangerous terrorists. Prisoners are held at the jail as they await their trials or transfers to federal prisons after conviction. It has housed close to 900 inmates in the past.

Now, about 200 inmates are left. Around 125 will be moved to the federal detention center just over the Brooklyn Bridge in downtown Brooklyn, and and about 75 will head to FCI Otisville, a medium-security prison in upstate New York.

But until they get transferred, they are serving time in squalor.

The pathway that trucks and buses would take inside isn’t useable because of structural concerns from decades of wear and tear, so inmates instead are brought in and out through pedestrian walkways outside, significantly raising security and safety concerns.

The ceiling in one part of the kitchen is falling in and it’s too unsafe to wash dishes, so inmates now eat off paper plates. In one housing unit, one of two sinks has a slow and steady drip; paint is peeling from the walls near the window and black spots stain the tiles in the single shower.

When the jail was built, the architect said he was told to make it “as little like a prison as possible,” a new style of lock-up for an urban area, not spread out over mass grounds but a vertical building more like a college dormitory or a hotel than a detention center.

But what was hailed by the Justice Department in the 1970s as a “quantum leap forward from traditional jails” eventually backslid into one. Lofty amenities fell by the wayside and even basic jail accommodations, like working cell doors, got harder to come by.

Within two years of its opening, it was already showing signs of failure. Its population had ballooned to 539 inmates — 90 more than it had been designed for — prompting a judge to declare the jail “unacceptably cramped and oppressive for most healthy inmates.”

Since then, it has slowly fallen into dank decay. The pipes are so old they sometimes stop working, and some are in such narrow quarters no one can get close to fix them. Repairing them is costly and requires cutting water, heat, or air conditioning to the entire jail. That means long-term repairs or upgrades aren’t feasible while prisoners are inside.

Certain housing units are no longer used because cell door openings known as food ports won’t close. Inmates might grab officers through the broken slots and assault them.

Even before news that the jail would close, judges were taking the deteriorating conditions into account when sentencing inmates, crediting them with extra for time served because they had to endure life there.

In April, Manhattan Federal Judge Paul Oetken gave Daniel Gonzalez a reduced sentence of time served on drug charges after the inmate described a “chaotic” stay at the jail that he said included being locked in a cell for 23 hours a day, not showering for days and a persistent foot infection.

“I do believe that because it’s been harsher than a usual period that it’s more punitive, that it’s essentially the equivalent of either time and a half or two times what would ordinarily be served,” Oetken said. “So, I think having served 24 months is equivalent to having served three years.”

The facility — which another judge said was “run by morons” — has cycled through four wardens in the past two years.

The warden brought in right after Epstein’s death abruptly retired in January after allegations of inmate abuse and of sexual misconduct involving staff members.

Her replacement, fresh from serving as an executioner in the Trump administration’s historic run of capital punishment that became a virus superspreader, lasted three months. The one after that was there just two weeks.

The current warden, in charge since May, was sent from a regional office to run the jail through its closure.

The Justice Department’s decision to close the MCC could be a sign of progress toward much-needed accountability for the federal Bureau of Prisons, advocates say. The jail was closed just a few weeks after Deputy Attorney General Lisa Monaco toured the conditions for herself, a signal the Biden administration recognized immediate action was needed.

The Bureau of Prisons has long been plagued by allegations of serious misconduct and abuse and has faced blistering criticism from the Justice Department’s inspector general, advocates and lawmakers. Just in the past two years, the agency has struggled with a failed response to the pandemic, a series of escapes, deaths and critically low staffing levels that have hampered responses to emergencies.

Nearly one-third of federal correctional officer jobs in the United States are vacant, forcing prisons to use cooks, teachers, nurses and other workers to guard inmates. The expanded use of that practice, known as augmentation, has been raising questions about whether the agency can carry out its required duties to ensure the safety of prisoners and staff members while also putting in place programs and classes required under the law.

One of the two officers assigned to guard Epstein the night he died was augmented and both were working overtime shifts. Prosecutors say they were sleeping and browsing the internet — shopping for furniture and motorcycles — instead of watching Epstein, who was supposed to be checked on every 30 minutes.

David Patton, the executive director and attorney-in-chief of the Federal Defenders of New York, said he was “genuinely surprised” that the government was closing the Metropolitan Correctional Center, which he called a failed institution. Though, he said, he and other public defenders figured something was going on because the inmate count kept dwindling.

“My experience with the BOP, at least with the facilities here, is that there just seems to be a complete lack of accountability,” Patton said. “It is a revolving door of wardens. Nobody seems to own the management of those facilities.”

Justice officials hope relocating prisoners to the Metropolitan Detention Center in Brooklyn will vastly improve things. But that jail, which opened in the early 1990s to alleviate crowding at the MCC in Manhattan, has had its own problems, including a botched response to a weeklong power failure in the winter of 2019, and an associate warden charged last month with killing her husband.

Still, conditions at the facility are still a vast improvement from just across the East River. Housing units are much newer, cleaner and larger; there are outdoor recreation facilities, enhanced medical services and a separate wing for educational programs and the jail’s library.

Staff members in Brooklyn are also preparing for the influx of new inmates by increasing telephone and video conferencing capabilities for visits with lawyers. The jail has built special rooms at the top of each unit with televisions for inmates to meet one-on-one with their lawyers virtually, in addition to the 20 attorney conference rooms in the regular visiting area.

The Brooklyn jail also offers a program for prisoners to earn GED diplomas, along with other educational programs and group therapy. The medical unit — staffed with about 30 people currently and more being brought from Manhattan — features a full dental suite, urgent care rooms and a handful of examination rooms for inmates to see Bureau of Prisons doctors.

As for the Manhattan jail, when the last inmate leaves, it’s not clear what will happen. The department hasn’t said yet what it would spend to fix the facility.