Jeff Sessions: Synagogue shooting is an "attack on all people of faith" - The Horn News 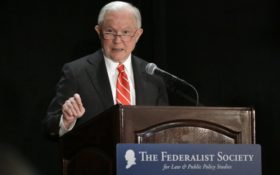 Attorney General Jeff Sessions says the shooting that killed 11 people at a Pittsburgh synagogue is an “attack on all people of faith.”

Sessions said during a discussion on religious freedom in Boston on Monday the targeting of people because of their faith will not be tolerated.

His appearance came a day after federal prosecutors said they’re asking the attorney general to give them the green light to pursue a death penalty case against the suspected gunman, Robert Bowers.

Sessions’ remarks were briefly interrupted by religious leaders protesting the Trump administration’s policies before they were quickly escorted out by police.

He responded there’s nothing in the scripture or in his theology that says “a secular nation state cannot have lawful laws to control immigration in its country.”