Heads up, liberals! Jeff Sessions has THIS ace up his sleeve - The Horn News 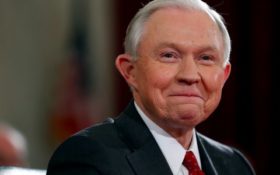 The Trump administration is looking for ways to deal with a recurring frustration: liberal federal judges who have gone rogue and put the brakes on one major administration policy after another.

But Attorney General Jeff Sessions has a plan.

The administration is telling the Supreme Court in a case about President Donald Trump’s travel ban that judges are increasingly using what are called nationwide injunctions to stop “a federal policy everywhere.”

The Justice Department says the high court should “reject the deeply misguided practice,” which has also been used against the administration’s crackdown on “sanctuary cities,” President Donald Trump’s announced ban on transgender military service members and, most recently, the effort to end legal protections for illegal immigrants.

Sessions has become the administration’s leading critic of the injunctions. Sessions said Tuesday they have been used 20 times in Trump’s first year in office, “as many as President Obama had in eight years.”

Legal scholars have attributed the rise of these broad judicial orders to a corresponding increase in executive action. In 2014, Obama acted to protect illegal immigrant parents of U.S. children after Congress refused to grant amnesty. Similarly, Trump unilaterally sought to impose travel restrictions on immigrants from seven Muslim-majority countries, identified by the Obama admnistration as Islamic “terror hot spots,” a week after taking office.

The issue has a decidedly partisan tinge. Since Trump has been president, Democrats and liberal interests have filed lawsuits in places where they think federal judges will be receptive, like California, Hawaii and Washington.

“It does run the risk of politicizing the judiciary,” said Amanda Frost, a law professor at American University, who has nonetheless defended the practice. “In an executive branch that often engages in unilateral, sweeping actions that are often implemented without notice, it’s vital to have a check on its authority.”

But Sessions has taken a dim view of the judges who ruled against the administration. Speaking of that matter, Sessions said this week that “one judge blocked the entire federal government from carrying out its lawful duty.” Last year, he referred to a federal judge in Hawaii who prevented the enforcement of the travel restrictions as a “judge sitting on an island in the Pacific.”

Trump himself reacted to an early court ruling against the travel policy by tweeting his criticism of the “so-called judge” who issued it.

Some legal scholars said the administration is on firm ground in complaining about judicial overreach. “The judge doesn’t have authority to do that,” said Samuel Bray, a UCLA law professor who is moving to the Notre Dame Law School. “Judges decide cases. The cases are brought by parties and the judges are supposed to give remedies to those parties.”

The limits on a judge’s power remain even in the face of a potentially unconstitutional policy, Bray said.

“There’s not an immediate solution to everything,” he said, “but our system is set up for deciding one case at a time.”

Cases typically reach the Supreme Court after lower courts disagree about an important issue and the justices step in to set a uniform nationwide legal rule.

The orders judges have been issuing that apply everywhere have the effect of short-circuiting the legal process, forcing the high court to step in sometimes before the issues are fleshed out.

The travel ban case is the first time the administration has raised the injunction issue at the Supreme Court, but it’s no sure thing that the justices will address it when they rule. They would first have to find that Trump overstepped federal immigration law or violated the Constitution when he imposed the travel restrictions. Only then would the appropriate remedy be at issue.

House Judiciary Committee Chairman Bob Goodlatte, R-Va., said at a hearing in November that he raised the issue with Chief Justice John Roberts and other judges. “There may be some hope they’ll do something,” Goodlatte said.

Who has YOUR support?