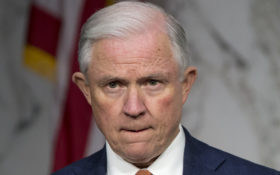 Attorney General Jeff Sessions is set to announce a major crackdown on the illegal leaks coming out of the White House on Friday — and his plan to lock-up anyone behind illegal leaks has conservatives cheering.

New Chief of Staff John Kelly has declared that one of his first points of order is to get these rogue employees under control.

“If [former Chief of Staff Reince Priebus] couldn’t control those leaks … then he was the one who was ultimately responsible, and General Kelly was brought in to make sure those leaks do not continue,” former Trump campaign manager Corey Lewandowski said on an appearance on Fox News’ morning show Tuesday.

But don’t expect anyone caught leaking information to the liberal media to simply lose their job.

Instead of being fired, Sessions has plans to slap handcuffs on them and haul them to jail!

“Sessions is expected to go further with an announcement on criminal leak investigations — specifically, concerning news reports that published sensitive intelligence material, according to officials who have been briefed on the matter,” Fox News reported.

Sessions has a Friday press conference scheduled to discuss his plans, at which he is expected to outline what the Department of Justice is aiming to accomplish moving forward — and possibly even highlight a high-profile arrest.

The attorney general’s announcement comes after increased criticism from Trump.

Sessions heard the order and is setting up the anvil.