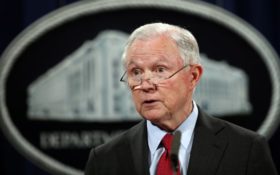 Attorney General Jeff Sessions unleashed his fury on federal judges Monday, saying that bias against President Donald Trump has led some to become “political actors” and place roadblocks in the way of Trump’s policies.

And he said he’s going to take the case to the Supreme Court by using emergency lawsuits.

Sessions blasted federal judges who he believes are paving a path to block a citizenship question from being added to the 2020 census.

The attorney general said, “once we go down this road in American government, there is no turning back,” adding that, “we intend to fight this, and we intend to win.”

In his fiery attack against federal judges, Sessions singled out Jesse M. Furman who ruled that Commerce Secretary Wilbur Ross could be questioned over the legality for the Trump administration to add a citizenship question to the census.

The attorney general said in a speech to the conservative Heritage Foundation, that the judge wants “to hold a trial over the inner-workings of a Cabinet secretary’s mind.”

The conflict centers on a judge’s order that Ross may be deposed by lawyers challenging whether a question on citizenship legally can be included on the census. Plaintiffs in two lawsuits, including more than a dozen states and big cities, have sued, saying the question will discourage immigrants from participating in the census.

Furman has said Ross can be questioned about how the citizenship inquiry was added to the census because he was “personally and directly involved in the decision, and the unusual process leading to it, to an unusual degree.”

In prepared remarks, Sessions decried the court order as but one example of judges improperly scrutinizing “internal deliberations” of an executive branch decision. He said judges too often are behaving like “roving inspectors general for the entire executive branch.”

“The words on the page don’t have a motive; they are either permitted or they are not,” Sessions said. “But the judge has decided to hold a trial over the inner-workings of a Cabinet Secretary’s mind.”

Sessions said the Trump administration plans to continue challenging efforts by courts to expose private deliberations of government agencies or to force the questioning of officials under oath.

“That’s why we’re taking these cases to the appellate courts and to the Supreme Court,” the attorney general added. “These actions are disrupting orderly governmental functions and placing great cost on the American people.”

The pending court challenges may ultimately be resolved by the Supreme Court — and with its conservative majority thanks to its recent addition of Justice Brett Kavanaugh, there will be an uphill battle for anti-Trump judges.

“Subjecting the executive branch to this kind of discovery is not acceptable, it’s just not,” Sessions said. “And we intend to fight it, and we intend to win.”