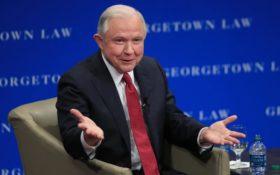 In a rare moment that displays the true meaning of democracy, Attorney General Jeff Sessions stood up for Democratic Senator Elizabeth Warren, saying she should not have been silenced in reading a letter that protested his appointment as attorney general.

“She certainly had the right to criticize my nomination,” Sessions said following a speech at Georgetown University law school. “I think she really had the right to read the letter that she was blocked, or at least temporarily blocked, from reading.”

When Sessions appeared before the Senate in February, Warren attempted to read a 1986 letter from Coretta Scott King that accused Sessions of “reprehensible” actions during an election fraud prosecution of Alabama civil rights leaders.

The Senate voted along party lines to silence Warren, citing a rarely used rule that prohibits personal criticism of another senator.

“She was warned. She was given an explanation. Nevertheless, she persisted.”

When asked about Warren’s treatment following his speech at Georgetown, Sessions said, “In general, the Senate is one of the most open debating forums in the history of the world. People feel that, and we should be very cautious before we constrict any member of the Senate from speaking on issues and in a way they choose.”

It’s an honorable defense of free speech that has politicians on both sides of the aisle respecting Sessions for his honesty and commitment to our Constitution.

You can see the portion of the Q&A below:

AG Jeff Sessions: @SenWarren "certainly had the right to criticize my nomination" during incident in which was she silenced on Senate floor. pic.twitter.com/3Uf1zgJSlw