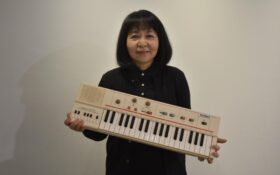 A musical revolution in Jamaica has a connection with a bouncy rhythm from a portable electronic keyboard that’s the brainchild of a Japanese woman.

The pattern that resonates in the 1985 reggae hit by Wayne Smith, “Under Mi Sleng Teng,” came from Casiotone MT-40, which went on sale in 1981, the first product Hiroko Okuda worked on after joining the Tokyo-based company behind G-Shock watches.

“It’s really like my first child, and the child turned out so well it’s outright moving,” said Okuda, honored as “the mother of Sleng Teng” among the hard-core reggae aficionados.

Sleng Teng is a form of digital Jamaican music that began in the mid-1980s, part of the rich repertoire of the disco-like genre called “dancehall.” No one contests the key role played by artists like Smith and King Jammy, as well as the humble, battery-operated, $150 MT-40.

One of the rhythm patterns Okuda created called “rock” on the MT-40 evolved into “Sleng Teng riddim.”

As legend goes, Noel Davey, the Grammy-winning keyboard player for the Marley Brothers, got an MT-40 from a friend, who picked it up in California. Before, Davey was blowing into a Melodica portable keyboard for that sound.

Davey was toying around with the MT-40 and chanced upon the beat that’s in Smith’s megahit “Under Mi Sleng Teng.”

And the rest is history, so to speak.

“You don’t plan,” Davey said, when asked about that moment.

There are so many buttons on the MT-40, he was “fooling around,” found it, lost it, then had to look for it and found it again.

“It was a searching process,” he said from Kingston, Jamaica.

The power of reggae comes from its healing effect, like “therapy,” being a music for the poor, for those moving up against apartheid, for the people, he said.

Davey, who has never been to Japan, said he would like to meet Okuda. The two share something in common — just as he feels he has never been properly credited for his role in the history of reggae, he stressed Okuda deserves credit for the Casio instrument.

That groove went on to inspire much of subsequent reggae, distinctly heard in works by Sugar Minott, Ibo Cooper, Gregory Isaacs and Dennis Brown.

“It has its place,” he said, demonstrating Sleng Teng on his bass. “A good song is a good song.”

Fletcher said other keyboards were also used to play Sleng Teng, such as Casio CZ-101 and Yamaha DX100, from Casio’s Japanese rival.

“Sleng Teng will never die,” said Fletcher, who has performed or produced songs for Shaggy, Maxi Priest and Alborosie.

Okuda, whose graduation thesis at Kunitachi College of Music in Tokyo was on reggae, was among the first recruits at Casio Computer Co. assigned to work on musical instruments, then a new sector for the company.

The company didn’t have very many musicians, and she was the one with background in world music. Okuda had immersed herself in reggae in the late 1970s, including going to Bob Marley’s concerts in Japan.

Okuda worked out six kinds of rhythms for the MT-40, including samba, swing and waltz, creating a bass line and a beat.

She also created two licks called “fill ins” to be played between sections of a song — or at the start of a song, as it is in “Under Mi Sleng Teng.”

For the prototype, she initially had an even more brash punk-rock-like rhythm called “avant garde.” The managers killed it as “too crazy.”

At least the “rock” pattern got approved, Okuda recalled with a laugh.

Casio’s main business was calculators, not keyboards, and so Okuda’s invention didn’t make much of a wave at her company. Okuda said she was usually among a handful of women in a room filled with men.

“I was a pioneer in so many places, and there were Japan’s old ways everywhere I went. I had to put up a fight each time,” she said.

She was never promoted to managerial positions, and never chosen for a business trip abroad. She has not traveled to Jamaica, or anywhere else except for China.

When asked if she has any advice for working women, Okuda pointed out having a special skill tends to help. She also has an extremely supportive husband, who took on much of the child-care responsibilities.

That definitely helped, she said.

The family shares a love for music, and music is always playing in their house. When they were younger, Okuda did feel a bit sad when her daughter and son would see her off at the door, singing, “Heigh-ho, heigh-ho, it’s work she loves to go,” to the tune in Walt Disney’s “Snow White.” These days, they joke maybe she’ll win the Nobel for the MT-40.

A more recent Casio technology Okuda has worked on is Music Tapestry, which translates music being played into a fluid visual image on the computer. Flowers float and swirl in time to the notes. Circles, squares and triangles dance about on the screen. Its sale date is undecided.

She doubts any of the reggae musicians know she is behind the MT-40. And how her MT-40 became part of such great music is nothing short of “a miracle,” she said.

“If I can ever meet them, I just want to express my deep gratitude. I want to tell them thank you so much for finding the rhythm and for using it,” she told The Associated Press.