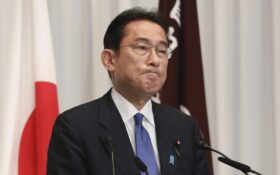 Former Japanese Foreign Minister Fumio Kishida won the governing party’s leadership election on Wednesday and is set to become the next prime minister, facing the tasks of reviving a pandemic-hit economy and ensuring a strong alliance with Washington to counter growing regional security risks.

Kishida replaces outgoing party leader Prime Minister Yoshihide Suga, who is stepping down after serving only one year.

As new leader of the Liberal Democratic Party, Kishida is certain to be elected the next prime minister on Monday in parliament, where his party and its coalition partner control both houses.

In his victory speech, Kishida vowed to tackle “national crises” including COVID-19, the pandemic-battered economy and the declining population and birthrate. He said he would pursue “important issues related to Japan’s future” through a vision of “a free and open Indo-Pacific” that counters China’s assertiveness in the region.

Kishida defeated popular vaccinations minister Taro Kono in a runoff after finishing only one vote ahead of him in the first round, in which none of the four candidates, including two women, was able to win a majority.

In a landslide 257-170 victory in the second round, Kishida received support from party heavyweights who apparently chose stability over change advocated by Kono, who is known as something of a maverick and a reformist.

Kishida is under pressure to change the party’s high-handed reputation, worsened by Suga, who angered the public over his handling of the pandemic and insistence on holding the Summer Olympics in Tokyo despite surging infections.

Kishida said he heard many voters in the past year complaining that they were being ignored. “I felt our democracy is in a crisis,” he said in his speech. “I, Fumio Kishida, have a special skill of listening to people. I am determined to make an effort toward making a more open LDP and a bright future for Japan together with you all.”

The 64-year-old former foreign minister was once seen as an indecisive moderate. Lately, however, he has shifted to become a security and diplomatic hawk as he sought support from influential conservatives to win the party election.

Kishida has called for a further increase in Japan’s defense capability and budget, and vowed to stand up to China in tensions over self-ruled Taiwan that China claims as part of its territory, and Beijing’s crackdown on dissent in Hong Kong.

On the economy, Kishida has called for a “new capitalism” of growth and distribution to narrow the income gap between the rich and the poor that widened under former Prime Minister Shinzo Abe, Japan’s longest-serving leader, and worsened during the pandemic.

“I will start a positive cycle of growth and distribution” to raise people’s income, not just to benefit big companies,” Kishida said at his first news conference as LDP president. He pledged to defend democracy, peace and stability and raise the country’s international profile.

Overall, little change is expected in key diplomatic and security policies under the new leader, said Yu Uchiyama, a political science professor at the University of Tokyo.

Kishida supports close Japan-U.S. security ties and partnerships with other like-minded democracies in Asia and Europe, in part to counter China and nuclear-armed North Korea.

Wednesday’s vote was seen as a test of whether the party can move out of the shadow of Abe, a staunch conservative. His influence in government and party affairs has largely muzzled diverse views and shifted the party to the right. Political watchers say Kishida’s win indicates a continuation of LDP power politics led by Abe and his influential allies.

“The results showed that LDP does not and cannot change,” said Yukio Edano, head of the largest opposition Constitutional Democratic Party of Japan. “As new LDP president, Mr. Kishida should explain how his leadership is different from the Abe-Suga administrations.”

Kishida has called for party reforms by limiting terms for executive positions, but is seen as a choice who could prolong an era of unusual political stability amid fears that Japan could return to “revolving door” leadership.

“Concern is not about individuals but stability of Japanese politics,” Michael Green, senior vice president for Asia at the Center for Strategic and International Studies, said in a telephone briefing ahead of the vote.

Green said voters will be watching if Kishida is swayed by power politics within his party or is attuned to the public.

Suga is leaving only a year after taking office as a pinch hitter for Abe, who suddenly resigned over health problems, ending his nearly eight-year leadership, the longest in Japan’s constitutional history.

Kishida lost to Suga in the 2020 party leadership race, which was determined by party heavyweights even before the vote. A third-generation politician from Hiroshima, Kishida has a reputation among his fellow lawmakers as polite and honest.

He was first elected to parliament in 1993. An advocate for nuclear disarmament, he escorted former U.S. President Barack Obama during his 2016 visit to Hiroshima, the city that was obliterated together with Nagasaki in U.S. atomic bombings in the closing days of World War II.

As foreign minister under Abe, he struck a 2015 agreement with South Korea to resolve a row over the issue of women who were sexually abused by Japan’s military during World War II, part of a legacy that still hampers relations between the two countries.

The banker-turned-lawmaker enjoys drinking sake and is a staunch supporter of his hometown professional baseball team, the Hiroshima Carp.