Japan adopts plan to maximize nuclear energy, in an about-face - The Horn News 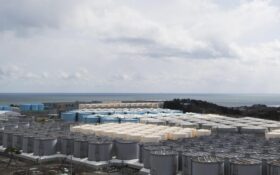 Japan adopted a plan on Thursday to extend the lifespan of nuclear reactors, replace the old and even build new ones, a major shift in a country scarred by the Fukushima disaster that once planned to phase out atomic power.

In the face of global fuel shortages, rising prices and pressure to reduce carbon emissions, Japan’s leaders have begun to turn back toward nuclear energy, but the announcement was their clearest commitment yet after keeping mum on delicate topics like the possibility of building new reactors.

Under the new policy, Japan will maximize the use of existing reactors by restarting as many of them as possible and prolonging the operating life of aging ones beyond a 60-year limit. The government also pledged to develop next-generation reactors.

In 2011, a powerful earthquake and the ensuing tsunami caused multiple meltdowns at the Fukushima Daiichi plant — a disaster that supercharged anti-nuclear sentiment in Japan and at one point led the government to promise to phase out the energy by around 2030. But since then, the government has recommitted to the technology, including setting a target for nuclear to make up 20-22% of the country’s energy mix by the end of the decade.

Still, restart approvals for idled nuclear reactors have come slowly since the Fukushima disaster, which led to stricter safety standards. Utility companies have applied for restarts at 27 reactors in the past decade. Seventeen have passed safety checks and only 10 have resumed operation.

According the paper laying out the new policy, nuclear power serves “an important role as a carbon-free baseload energy source in achieving supply stability and carbon neutrality” and pledged to “sustain use of nuclear power into the future.” Prime Minister Fumio Kishida said he planned to get the Cabinet to approve the policy and submit necessary bills to Parliament.

As part of the new policy, the Economy and Industry Ministry has drafted a plan to allow extensions every 10 years for reactors after 30 years of operation while also permitting utilities to subtract offline periods in calculating reactors’ operational life.

The plan was endorsed on Wednesday by the Nuclear Regulation Authority, Japan’s nuclear watchdog. New safety inspection rules still need to be put into law and approved by Parliament.

The regulation authority’s commissioner, Shinichi Yamanaka, told a news conference the new safety rules requiring operational permits every decade after 30 years will be safer than a current one-time 20-year extension option for 40-year-old reactors. But experts cast some doubt on that.

Takeo Kikkawa, an economics professor at the International University of Japan and an expert on energy, said utility operators under the new policy could keep using old equipment instead of investing in new technology or renewables.

“Naturally, we should aim for newer technology and use it safely. Therefore, extending reactors’ lifespans is an undesirable move,” Kikkawa recently told a talk show.

Most nuclear reactors in Japan are more than 30 years old. Four reactors that have operated for more than 40 years have received permission to operate, and one is currently online.

Under the new policy, Japan will also push for the development and construction of “next-generation innovative reactors” to replace about 20 reactors now set for decommissioning.

Kenichi Oshima, a Ryukoku University professor of environmental economy and energy policy, said some of what the government calls “innovative” reactors are not so different from existing technology and that prospects for nuclear fusion and other next-generation reactors are largely uncertain and not achievable anytime soon.

Thursday’s adoption of the new policy comes less than four months after Kishida launched the “GX (Green Transformation) Implementation Council” of outside experts and ministers to “consider all options” to compile a new policy that addresses global fuel shortages amid Russia’s war on Ukraine and seeks to achieve carbon neutrality by 2050.

Nuclear energy accounts for less than 7% of Japan’s energy supply, and achieving the government’s goal of raising that share to 20-22% by 2030 will require about 27 reactors, from the current 10 — a target some say is not achievable. The new policy also does not help address imminent supply shortages because reactors cannot be restarted quickly enough.

While public opinion on nuclear energy has softened since Fukushima, opponents still argue atomic power is not flexible and not even cheaper than renewables when final waste management and necessary safety measures are considered — and that it can cause immeasurable damage in an accident.

The regulation authority came under fire Wednesday after revelations by a civil group that a few of its experts had discussed details with industry ministry officials before the watchdog was officially asked to consider a rule change for aging reactors, despite their compulsory independence.

Prime Minister Kishida also said Thursday that the government will do more to find candidate sites for a final repository for high-level nuclear waste that Japan does not yet have. Preliminary studies have begun in two small towns in Hokkaido, angering some residents.