James Comey: I have no Hillary regrets - The Horn News 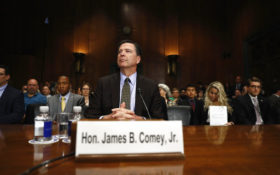 FBI Director James Comey was grilled by the Senate Wednesday about his decision to reveal the reopening of the investigation into Hillary Clinton 11 days before the presidential election, and he had one major thing to say: I would do it the same way all over again.

But critics of the Clinton cartel say: That’s not good enough.

Comey admited it would have been “catastrophic” to hide the new developments in the criminal investigation into Hillary’s misuse of classified emails that emerged close to Election Day.

But not acting on them?

Comey, in the most impassioned and public defense of how he handled this case, also said it made him feel “mildly nauseous” to think his actions in October could have influenced the race won by Republican Donald Trump over Democrat Clinton.

But he told the Senate Judiciary Committee that the FBI cannot take into account how its actions might harm politicians.

“I can’t consider for a second whose political futures will be affected and in what way,” Comey said. “We have to ask ourselves what is the right thing to do and then do it.”

Speaking at times with a raised voice, Comey said he faced two difficult decisions when agents told him they found emails connected to the Clinton case on an unsecure laptop belonging to former New York Rep. Anthony Weiner, who was married to Clinton insider Huma Abedin.

Comey said he knew it was unorthodox to alert Congress to that discovery 11 days before Americans picked a new president. But he said he decided it would have been “catastrophic” to keep silent, especially when he had testified under oath that the investigation had been concluded.

“I sat there that morning and could not see a door labeled, ‘No action here,'” Comey said.

But critics can easily think of one action he should have taken: Throw her behind bars.