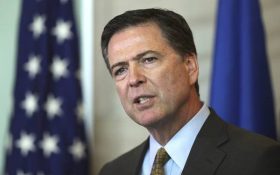 Former FBI Director James Comey made a prediction on Thursday that rocked the halls of power in Washington, D.C.

Comey told a St. Louis public radio station that he has reason to believe special counsel Robert Mueller’s investigation is about to end — what he called the “fourth quarter” of the probe.

The controversial former lawman turned professional Trump critic said that “an argument to be made that the conviction — the plea and cooperation by Paul Manafort – may represent that we’re in the fourth quarter.”

“The way you normally do investigations is you work from the bottom up, and so they’re getting pretty high,” Comey said.

Comey admitted he wasn’t certain, however, and praised the secretive investigation. “Bob Mueller conducted his investigation like a pro – you know nothing about it except through his public filings, and that’s the way it’s supposed to be,” Comey said.

Mueller has been investigating Russian meddling in the 2016 election for 16 months. Democrats have widely supported Mueller, while President Donald Trump and his political allies have repeatedly claimed the investigation is a partisan “witch hunt.”

Earlier this week, the White House ordered the declassification of documents related to the early days of the investigation.

The president said the 21 documents contain evidence that the Mueller probe was motivated by partisan politics.

“What will be disclosed is that there was no basis for these FISA Warrants, that the important information was kept from the court, there’s going to be a disproportionate influence of the [Steele] Dossier,” New York Rep. Peter King, a Republican ally of Trump, said.

“Basically, you have a counter terrorism tool used to spy on a presidential campaign, which is unprecedented in our history,” King concluded.

READ MORE: Mueller probe BOMBSHELL unearthed (is this the end!?)