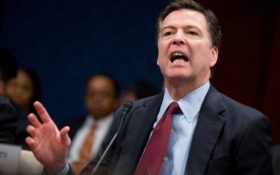 On June 8, we could see one of the wildest and most dramatic scenes ever to unfold on Capitol Hill: The former director of the FBI being taken out of the room in handcuffs.

It could happen when James Comey testifies before the Senate.

Comey, according to reports, wrote a memo complaining that President Donald Trump pressured him to drop his investigation into former National Security Advisor Michael Flynn.

Trump furiously denies this and has in the past implied there are “tapes” of his conversations with Comey.

That sets up a high-stakes game of chicken during Comey’s testimony next week.

Comey could confirm the memo and everything in it, and he can do it confidently if he knows it’s all true.

But what if it’s false?

Then, as Trump said, he’d better hope there are no tapes!

If he lies under oath – gambling that the tapes don’t exist – he could be in for a shock if they’re released by Trump himself DURING his testimony, perhaps only moments after he says something blatantly false.

Lawmakers could have no choice but to have Comey arrested on the spot for perjury!

Even if no tapes exist, there’s a question over whether Comey has already contradicted the supposed memo, which has been reported on breathlessly by the liberal media.

Last month, before he was fired, Comey was asked by Sen. Mazie Hirono, a Democrat from Hawaii, if the attorney general or anyone at the Justice Department could halt an FBI investigation.

“Has it happened?” Hironi asked?

“Not in my experience,” Comey said, adding:

“Because it would be a big deal to tell the FBI to stop doing something that — without an appropriate purpose. I mean where oftentimes they give us opinions that we don’t see a case there and so you ought to stop investing resources in it. But I’m talking about a situation where we were told to stop something for a political reason, that would be a very big deal. It’s not happened in my experience.”

Would that be perjury?

Comey could argue it’s not since he was asked specifically about the attorney general and the Justice Department.

And maybe it wouldn’t be.

But there’s another charge that COULD apply, and that’s false representation to Congress, because certainly his statement could be read to mean he’s never been “told to stop something for a political reason.”

Like perjury, false representation is a serious charge that carries a potential sentence of up to five years in prison.

And that means he could go from the witness table in Congress to a D.C. prison cell awaiting charges… quite possibly in the very same day.

Forget the summer box office. Looks like C-SPAN on June 8 might be the biggest spectacle of the season!