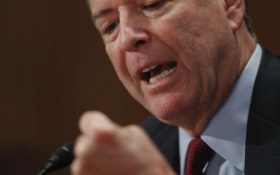 Former FBI Director James Comey has less than 39 days left as the darling of the mainstream media.

Comey used his contentious relationship with President Donald Trump as a social catapult. He’s leveraged his now-household name into a multi-million dollar book deal, and has been the subject of numerous gushing interviews by cable news hosts.

By the end of June, that’s all over. An upcoming report from the Justice Department’s internal watchdog is expected to heavily criticize Comey and other senior FBI leaders for not moving quickly enough to review a trove of Hillary Clinton emails discovered late in the 2016 campaign, according to people familiar with the findings.

This will likely disgust the last supporters Comey has remaining. The FBI’s timing has been a sore point for liberal Hillary supporters, who say Comey’s announcement of the new review less than two weeks before the Nov. 8, 2016, election contributed to her loss. The agency’s findings affirming its decision not to pursue criminal charges against Clinton were disclosed two days before the vote — too late, her supporters say, to undo the damage.

Some FBI officials knew in September 2016 of the emails on former Rep. Anthony Weiner’s laptop but the bureau did not review them until the following month.

An inspector general report examining a broad range of FBI actions during the Clinton email investigation will seriously criticize officials, including Comey, for their mismanagement of the investigation.

A lawyer for Comey and spokespeople for the inspector general and the FBI all declined to comment Monday.

The nonpolitical watchdog has been pulled into the partisan arena amid demands to investigate FBI actions under former President Barack Obama, whose administration used their influence to insert at least one paid “informant” into the Trump presidential campaign.

On Sunday, the Justice Department asked the inspector general, Michael Horowitz, to expand his existing investigation over evidence that Trump and his associates were illegally monitored during the campaign for political reasons.

The report dealing with Hillary’s illegal email server arises from a wide-ranging investigation launched in January 2017. It has been examining actions including Comey’s decision to announce his recommendation against criminal charges at an FBI headquarters news conference and his decision months later to alert Congress that the probe had been reopened because of the discovery of email messages on Weiner’s laptop.

In addition to Comey, the report is also expected to criticize two FBI officials who exchanged derogatory text messages about Trump during the course of the Clinton investigation.

A draft of the report has been completed, and officials whose actions are scrutinized in it have been permitted with their lawyers to review it and respond to the findings. The final version is expected out next month.

A separate inspector general report from last month faulted former Deputy Director Andrew McCabe for misleading investigators about his role in a 2016 news media disclosure about an investigation into the Clinton Foundation.

McCabe, who has denied wrongdoing, was fired because of those findings, and the inspector general has referred the matter to the U.S. Attorney’s office in Washington for possible criminal prosecution.

Weiner is the former husband of top Hillary Clinton aide Huma Abedin. His laptop was being analyzed by FBI investigators as part of a separate pedophilia investigation involving a teenage girl. Weiner, a former Democratic congressman from New York, is serving a 21-month prison sentence after pleading guilty to sending sexually explicit material to a 15-year-old girl.

How will history judge James Comey