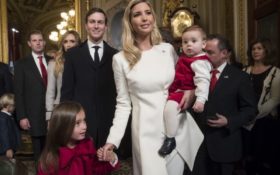 Ivanka is a proud American, and the first family went out of their way to show the men and women that protect them gratitude. It was also a valuable lesson to their children.

And predictably, the mainstream media ignored it.

The Daily Mail posted the image of Kushner, 5-year-old Arabella, and 3-year-old Joseph.

Jared and the kids bring treats out to the Secret Service https://t.co/TmTsUnQXZi pic.twitter.com/kvNh9V13OF

And it must’ve been appreciated, because the Trump family has kept up with the gratuitous acts.

The simple act of kindness has been ignored by the mainstream media, who are busy attacking Trump over the healthcare fight brewing in Congress.

It is just another example of the tasteless liberal bias against the Trump family.

Instead of focusing on their leadership qualities, the media focuses on things like Ivanka’s neighbors distaste for her and her Secret Service detail taking up space on their street… all while ignoring the favorable comments some have made about the family.

Is it any surprise less and less Americans trust the mainstream media?

Sponsored: Seniors Can Collect $480 per Week From This Unusual “Side Job”

Ivanka has reportedly gone beyond making baked goods just for the Secret Service, and has been delivering them to her new neighbors as a introduction and to ease concerns about their presence in the neighborhood.

You won’t hear that on CNN.