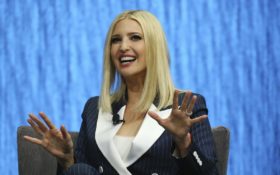 The word broke this week that the president’s daughter had volunteered.

Ivanka Trump has donated one million meals to Ukrainian refugees, the media reported on Wednesday.

Ivanka made it possible for multiple charities to deliver tons of food to Ukrainian refugees… the president’s daughter brought 158,400 pounds of food to starving people in the middle of a war, Fox News has reported.

“With this food, I hope to provide a small source of comfort and nourishment for Ukrainians who are suffering so greatly,” Ivanka Trump said.

Ivanka has a “very personal connection” to any kind of crackdown on freedom in that part of the world:  Her mother grew up in Czechoslovakia — an artificial country the Soviets created, which doesn’t even exist anymore. When her mom lived there, the USSR dominated the country, which was one of the far-flung areas of the Communist empire in the West, all the way from Moscow.

Ivanka’s 96-year-old grandmother, Marie Zenicova, still lives with her to this day in Florida and teaches her great-grandchildren how lucky they are to grow up in a free country like America.

Ivanka knows how fortunate she is… and how much the people in that area are suffering.

She worked to bring multiple nonprofits together for the Ukrainian people: CityServe, City of Destiny, Mercy Chefs, the UPS Foundation, the Pentecostal European Fellowship, and churches all over the region worked together to feed people fleeing from Russian bullets and foreign aggression.

“The Ukrainian people have shown inspiring courage and resilience during the invasion of their country by Russia,” Ivanka Trump said. “As is often the case, pain and hardship are disproportionately borne by the most vulnerable.”

So, she decided to spring into action to make things better.

She enlisted the help of megachurch Pastor Paula White-Cain, who had advised her father, to help feed the poor.

“Quite honestly, if it weren’t for her immediate involvement, a plane would not already be on its way to Poland right now to deliver one million meals for Ukrainian refugees fleeing the devastation of their nation,” said White-Cain.

“I got a call from Ivanka Trump. She and I worked closely in the White House to put together a national hunger relief program called Farmers to Families,” she told Fox News. “When I told Ivanka what we were doing, she went into action as only Ivanka can.”

Together, they sent out the food to Ukrainian refugees who have fled for safety to Warsaw, Poland—food that people in the area say is their very favorite: goulash for dinner, and hearty oatmeal for breakfast.

As the pastor mentioned, it wasn’t the first time President Trump’s daughter had helped feed hungry people. She tweeted of another program:

“Thanks to our incredible partners + volunteers who helped feed families across Idaho & NY fresh, locally-sourced produce & dairy this holiday season.

Thanks to our incredible partners + volunteers who helped feed families across Idaho & NY fresh, locally-sourced produce & dairy this holiday season.

What’s that? You hadn’t heard about either of those programs?

Of course not: This is Trump’s family. The media won’t say one good word about anyone in the whole Trump family, no matter how much good they do.

Now, imagine if Barack Obama’s wife or children thought about helping these people? The media would never stop cramming it down your throat.

Remember when Michelle Obama did decide to do something, however misguided, it was? The media covered her 24/7.

But the Obamas mostly think about helping themselves these days—with huge Netflix deals and the construction of the most expensive presidential “library” in history…which paved over areas the poor and homeless use in Chicago.

Somehow that didn’t make the media, either.

It’s almost like the media have an agenda never to cover anything good the Trump family does or anything bad the Obama family is responsible for.

Ivanka Trump should know—and Paula White-Cain can tell her—that her reward for these good deeds won’t come from the media. It will come from the smiles of these starving Ukrainians…

And from a Higher Power.