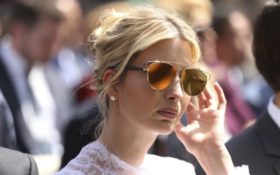 Ivanka Trump is also a senior adviser to her father. Arriving Friday she smiled but declined to say what she planned to discuss with the U.N. chief.

Likely to be on Guterres’ agenda are significant cuts to the U.N. budget proposed by the president and U.S. opposition to the 2015 Paris climate change agreement, which Guterres strongly supports.

Nikki Haley, the U.S. ambassador to the United Nations, told CBS’s “Face the Nation” earlier this month that she thinks Ivanka Trump considers herself “part of a public servant family” and wants to put forward “some effort to try and help the world.”