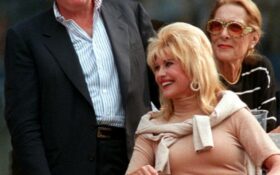 The late Ivana Trump, first wife of the former president, was buried Wednesday.

One attendee, speaking to the New York Post, described the resting place as “a private grassy area… not too far from the main clubhouse.”

According to this account, the late Ms. Trump would have been buried near the first hole.

The former president originally planned for the burial site to include 19-foot-tall mausoleum complete with obelisks, but Bedminster land use board nixed that idea, according to a filing reviewed by The Washington Post.

“It’s just a very discreet piece of granite engraved with her name,” the attendee told the NY Post.

The former president plans to be buried in this same plot. He also reportedly plans to sell other burial plots in a second cemetery on the same golf course, according to Trump Organization filings from 2014.

“Mr. Trump is the owner of many properties around the world but specifically chose this property for his final resting place as it is his favorite property,” the Trump Organization wrote in a 2014 filing obtained by the Post.

The Trump family has attracted attention by planning burials at this site.

All presidents can opt to be buried in Arlington National Cemetery in Virginia. Some presidents choose their presidential libraries.

Plus, the Trump family has another burial plot in its native New York City. The former president’s parents are both buried at All Faiths Cemetery in Queens. So is his brother, Fred Trump Jr.

“It never made any sense to me,” Robert Holtaway, a local official in Bedminster, told the Post in 2017. However, he added, “We don’t question motives. We’re there as a land-use board.”

In 2016, the Trump family’s representative told the land-use board that “only the good Trumps” would be buried on the golf course, according to a video reviewed by the Post.

The former president appears to enjoy the land for its beauty. “This is such beautiful land, and Bedminster is one of the richest places in the country,” he told Page Six in 2007.

All three of Trump’s children — Eric, Ivanka and Don Jr. — gave eulogies at her funeral Wednesday. Twitter users expressed condolences to her 10 grandchildren.

The former president himself gave his first wife some kind words in an interview with the New York Post on Wednesday.

“She went from communism to our lives together,” he said. “She took nothing for granted.”

Watch the video of the funeral here —