It's official: Trump is back! - The Horn News 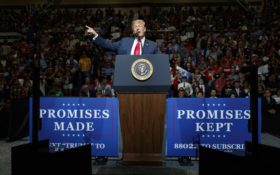 Former President Donald Trump must be getting a little restless in Florida – because he’s reportedly ready to hit the road for a new series of his signature rallies.

“Brace yourselves, folks: Trump's MAGA rallies are coming back” https://t.co/lO3du6LMdJ

But this time, it’s not to promote his own candidacy.

He’s not on the ballot.

But his agenda very much is as Republicans look to retake control of the House and Senate in the 2022 midterm elections.

That could spell bad news not just for Democrats, but also for some in his own party.

Trump is already known, for example, to be looking to endorse someone to run against Sen. Lisa Murkowski, R-Alaska.

And he’ll no doubt be happy to give his backing to a Republican who runs against Rep. Liz Cheney, R-Wyo., who just lost her position as the number three leader in the House GOP due to her opposition to Trump.

Along with Cheney, nine other Republicans in the House voted for Trump’s second impeachment – and all of them will be ripe for a primary challenge from a Trump-backed candidate.

“His endorsement lifts candidates above the pack and often clears the primary field,” Miller told Axios. “The general election endorsement provides access to ‘Trump voters’ not normally accessible to Republicans.”

That could make 2022 not just a battle for the House and the Senate in the midterms… but one that could show how much strength in the party Trump has left.

One unnamed GOP operative told The Hill earlier this year that it might be a bad idea to count him out.

“Trump has a super PAC with $200 million and he’s got the largest small-dollar email list in the country,” the source was quoted as saying. “Even if his support within the party has plunged from 90 percent to 50 percent, that’s a huge amount of people he’s got with him and when the primaries start later this year, the GOP’s base voters will remember this.”

There’s another reason for the rallies: His supporters love them.

“We need a Trump rally, sir… Can you just do one for fun!?” Dan Bongino asked him during a podcast interview in April. “We need to feel alive again!”

Trump’s rallies packed arenas, theaters, parking lots and airpots since he first became a candidate in 2015, with crowds often spilling out of the rally zone and into the nearby streets, which had an almost festival atmosphere.

Trump himself would sometimes visit those spillover areas to big cheers.

While the new rallies won’t be for a presidential campaign, aides say they will still look pretty familiar.

“It will definitely be different in terms of the setup, but we got really good at planning these events in 2020, so we will probably use a lot of those same vendors again,” one unnamed Trump aide told CNN.

And there’s one final reason he could soon hit the road and stay there – and it’s not the midterms.

Trump has teased that he could run again in a rematch against President Joe Biden.

He told Candace Owens of The Daily Wire earlier this month that he can’t make an announcement too early for campaign finance reasons.

“But I think people are going to be very, very happy when I make a certain announcement,” he said.