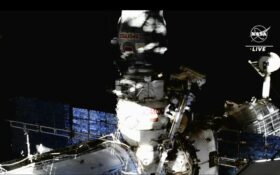 An Italian astronaut joined a Russian cosmonaut in a rare spacewalking show of unity Thursday, as tensions over Ukraine continued to ricochet back home.

The Russian Space Agency’s recently replaced chief, Dmitry Rogozin, threatened to halt the installation work last week, putting the spacewalk in question. After Russia’s invasion of Ukraine in Feburary, Europe pulled out of its collaboration with Russia on a mission to Mars.

Despite the turmoil on Earth, the space station’s seven residents have repeatedly stressed that they’re getting along fine up there, as have the flight control teams in Houston and Moscow. The current crew includes three Americans, three Russians and Cristoforetti.

Russian cosmonauts typically pair up together for spacewalks, although NASA and European Space Agency astronauts occasionally ventured out with them years ago.

Before tackling the arm installation work, Artemyev tossed 10 mini satellites overboard, one by one, in a radio technology experiment. Each weighed just 1 pound (one-half kilogram) and rotated slowly as they were released.

The first six drifted harmlessly away, but the seventh one brushed against a space station solar wing and framework. Artemyev said the contact was very mild. NASA agreed there was no concern of damage.

Russian Mission Control urged Artemyev to be more careful, and his pitch improved for the last three satellites.

The seven-hour spacewalk was the first for Cristoforetti, the lone woman in the European Space Agency’s astronaut corps. Artemyev, the station’s commander, is now a six-time spacewalker.