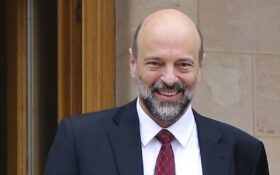 Jordan’s prime minister says the kingdom would look “positively” on the creation of a binational state that guarantees equal rights to Israelis and Palestinians if Israel’s proposed annexation of parts of the occupied West Bank closes the door on a two-state solution.

The international community and the Palestinian leadership remain committed to a two-state solution to the decades-old conflict. Israel rejects the idea of a binational state, fearing an eventual Palestinian majority would endanger its existence as a Jewish and democratic state.

But Israeli Prime Minister Benjamin Netanyahu’s pledge to annex up to a third of the West Bank in line with President Donald Trump’s Mideast plan would make it virtually impossible to establish a viable Palestinian state. Critics say that would force Israel to choose between being an apartheid state or granting equal rights to all.

“You close the door to the two-state solution, I could very well look at this positively, if we’re clearly opening the door to a one-state democratic solution,” Jordan’s Prime Minister Omar Razzaz told the UK’s Guardian newspaper in an interview published Tuesday.

“I challenge anybody from Israel to say yes, let’s end the two-state solution, it’s not viable,” he said. “But let’s work together on a one-state democratic solution. That, I think, we will look at very favourably. But closing one and wishful thinking about the other is just self-deception.”

Jordan, a close Western ally and one of just two Arab states to have made peace with Israel, is strongly opposed to annexation. Along with most Arab and Western countries, it supports Palestinian demands for a state in the West Bank, Gaza, and east Jerusalem, territories captured by Israel in the 1967 war.

Earlier this month, a prominent Jewish American commentator came out in favor of a binational state, sending shock waves through the Jewish establishment and Washington foreign policy circles.

Peter Beinart, a journalism professor at City University of New York and contributor to The Atlantic, argued that the two-state solution was no longer possible and endorsed the idea of a single democratic state between the Mediterranean and the Jordan River with equal rights for Jews and Palestinians.

Support for a democratic, binational state is still largely confined to a small group of intellectuals on both sides of the Israeli-Palestinian conflict. No major party or faction in Israel or the Palestinian territories endorses it.

While the two-state solution is still widely seen as the only way of resolving the conflict, the two sides remain deeply divided about the core issues and have not held substantive talks in more than a decade.