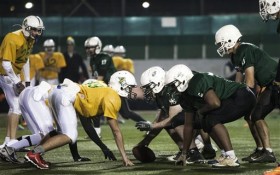 Under the bright lights, a call of “set, hike” echoes out, followed by the clatter of helmets smashing against pads at a high school football game. But these aren’t American teenagers hoping to play college ball — they are Israelis with an eye on joining elite military combat units.

A growing number of native-born Israelis have taken to the army-like strategy, camaraderie and collisions of the gridiron and turned America’s Game, once a niche expat activity, into a popular fixture in the Holy Land. Some 2,000 Israelis now play the game, thanks in large part to the support of New England Patriots owner Robert Kraft.

In the central city of Kfar Saba, the hometown Hawks are Israel’s four-time defending high school champions and their coach, the son of a former Israeli military chief, is churning out nearly as many commandos as victories.

“Football is a great tool for building a young man,” said head coach Itay Ashkenazi, 36. “The mentality of football is very similar to what you try to instill in elite combat units.”

Ashkenazi used to be a special forces commando himself, and his father, Gabi Ashkenazi, was the military chief of staff from 2007 to 2011. Yet Ashkenazi, who was a star quarterback in the adult Israel Football League until retiring a few seasons ago, says football has meant more to him than the military, and he tries to instill that love of the game in his young charges.

“Most of them coming in, they don’t know football, they don’t know anything about it. But you try to ‘sell’ the football as a tool for what they are going to do afterward, which is the army,” said Ashkenazi, who owns an insurance company in addition to his part-time work as coach.

He said word was getting out that his players made for good soldiers. The military itself had no comment.

Military service is compulsory for most Israelis, and Ashkenazi’s players have gone on to careers in some of the army’s most prestigious units, serving in elite commando, reconnaissance and undercover units. The army is Israel’s most admired institution, but Palestinians and human rights groups see the military as a tool of Israel’s occupation of lands sought by the Palestinians for a future independent state.

Soccer and basketball reign supreme in Israel, but football has gained ground in recent years thanks to live NFL TV broadcasts and the expansion of the IFL, now in its 9th year. Organizers hope it will soon join the ranks of secondary sports like tennis, handball and volleyball.

The game has really taken off on the high school level, where seven teams play across the country. It is no longer unusual to see kids tossing the pigskin in the park after school.

Unlike baseball, which still mostly appeals to American-Israelis, football has resonated with natives thanks to a “bottom-up” grassroots approach, said Steve Leibowitz, who got the sport started in the 1980s and later founded American Football in Israel, the official federation.

Leibowitz has since ushered football from its touch and flag origins to the current tackle leagues and a national team that ranks 17th in the world. Despite the sport’s inherent English terminology, he said his philosophy called for “Hebrew in the huddle.”

He said the teenagers started organizing themselves and turned to him for equipment only when they had enough players to field teams.

“They like the idea of the strategy of it all, the planning before you exit the huddle, how everyone has a job, everyone has a role, just like in the army,” he said.

The turning point came when Kraft, the Jewish owner of the Patriots, was on a visit to Israel in 1999 and was approached by a hotel worker who played the game. A surprised Kraft reached out to Leibowitz and began financing the sport, which spawned five separate leagues for men and women that he continues to sponsor.

Jerusalem’s Kraft Stadium is named for him, its artificial turf featuring a Patriots logo at midfield and its offices adorned with Patriots memorabilia. Tom Brady and other Patriots stars have visited over the years, and last summer Kraft brought a group of 19 Hall of Famers to Israel to promote the sport.

Israeli football is still very different from the U.S. game. High school teams play 9-on-9 on a 60-yard field on modified soccer pitches. The teams are forced to always go for two points after a touchdown because there are no proper goal posts. Their chest-bumping and pre-game chants still draw curious gazes from onlookers.

The Kfar Saba Hawks have been the juggernaut of the six-year-old league. They improved to 5-0 this season after an 82-0 drubbing last week of the Mazkeret Batya Gorillas. They haven’t lost in four years and the players say the games have actually become easier than the grueling practices, where they tackle each other with gusto, run wind sprints and drop for push-ups after bungled plays.

Bar Shaul, the Hawks’ 17-year-old starting tight end and captain, said no other sport has excited him like football, and that nothing provides better preparation for the military service that awaits him.

Teammate Koren Copelovitz said he has grown in confidence since becoming the team’s starting quarterback, a leadership role he thinks will carry over to the army.

“We get a lot for respect for being a football player because everybody knows how hard we train and how hard we play and how much success we’ve had,” he said.