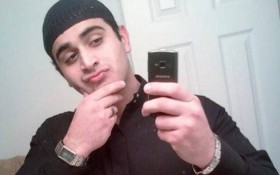 The radical Islamic terrorist who killed 49 people in the Pulse nightclub attack was shot and killed hours afterward. Now, nearly two years later, his widow is being held accountable, charged with helping her husband plan the attack.

The trial of Noor Salman, widow of shooter Omar Mateen, opened Thursday with jury selection that is expected to be lengthy, owing to the difficulty of finding jurors in the Orlando area capable of being fair and impartial given the high profile of the massacre — at the time, it was the worst mass shooting to take place in the United States.

The defense plans to argue that Salman was abused by her husband and afraid to defy him.

U.S. District Judge Paul G. Byron questioned jurors one by one about their knowledge of the Pulse nightclub shooting and whether they knew anyone connected to the incident or the case. It took a half-hour Thursday morning to question the first potential juror; each person called had previously filled out a lengthy questionnaire about their backgrounds, opinions, and knowledge of the case.

The judge said the trial could last five weeks or more once the twelve jurors are chosen — a process that itself will likely take several days. He asked the potential jurors about whether they can be impartial in the wake of the Parkland, Florida, school shooting, and also asked if they believe the war on terror targets Muslims. Potential jurors were also asked if they know survivors or victims of a terrorist attack.

Four jurors were questioned in the morning session; two were kept in the potential pool, while the other two were dismissed.

Salman, 31, is charged with aiding and abetting her husband, Omar Mateen, in planning the June 16, 2016 attack. She’s also been charged with obstruction of justice and faces life in prison if convicted.

On Thursday morning prior to the proceedings, a man stood across the street from the courthouse holding a sign that read, ” ‘FRY’ HER TILL SHE HAS NO ‘PULSE’.” There were no other visible demonstrators, but security in the federal courthouse was tight. Some Pulse victims’ families are in attendance.

Barbara Poma, the owner of the Pulse nightclub, walked out of the courtroom during the midday break alongside the mother of a man who died in the attack. Both declined to speak to the media.

Community leaders said the trial could bring difficult emotions to the surface for many people.

“Let’s be mindful of each other, and be ready to offer support and compassion to all those in need,” said Orange County Mayor Teresa Jacobs.

Florida Governor Rick Scott added, “While the horrific terror attack at Pulse left a solemn impact on our state, Floridians have shown incredible resiliency, bravery and love in the face of this extreme loss.”

Orange County Mayor Teresa Jacobs said the trial may bring difficult emotions to the surface those still grieving. Orlando Mayor Buddy Dyer said it is “incomprehensible” that the incident took place at an LGBT nightclub in the city.

Florida Gov. Rick Scott said in a statement that Floridians have showed resiliency, bravery and love in the face of loss.

The federal courthouse is 2.5 miles (4 kilometers) from Pulse, which was an LGBT nightclub.

Today, the property is surrounded by green fencing and signs explaining that an interim memorial will be built there and is under construction until April 2018. Banners on the fencing have been signed by community members. One person wrote in pen: “Not a day goes by where I don’t think of you. Missed forever, remembered always.”

Mateen, who had pledged allegiance to the Islamic State, was killed by police in the hours after the shooting.

Prosecutors say Salman lied to authorities about her knowledge of her husband’s plans. She was arrested in California in 2017, where she was staying with family, and has been in jail since.

From various court documents, it is expected that the defense will say Salman was afraid of her husband and unable to question him about the attack. Her attorneys also claim she wasn’t given proper Miranda warnings by authorities before she made statements.

On Wednesday, the judge unsealed some documents in the case that were submitted by the defense. A nurse and a psychologist who evaluated Salman said she was physically abused by her husband and was afraid to question him about the attack.

“Noor Salman is a severely abused woman who was in realistic fear for her life from her abusive husband,” wrote Jacquelyn Campbell, a nurse whom defense lawyers are offering as an expert in domestic violence and post-traumatic stress disorder. “Her behavior was entirely consistent with severely abused women who are completely controlled by a highly abusive male partner.”