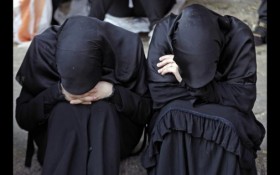 Suspected militants ambushed a vehicle carrying women activists from a non-governmental organization in a former northwestern tribal region bordering Afghanistan on Monday, killing four of them and wounding the driver, police said.

The attack took place in the village of Epi in Mir Ali, a town in North Waziristan district, said Iqbal Khan, a local police officer. Shafi Ullah Khan, a district police chief, also confirmed the attack, saying police were searching for the attackers. They fled to nearby mountains and no one has claimed responsibility.

Khan said the victims belonged to the Sabawon Pakistani charity, which provides training to women interested in doing business from their homes and creates awareness among them about their rights.

Khan said the women activists traveled to Mir Ali from the town of Bannu in the Khyber Pakhtunkhwa province. It was unclear why police and the charity gave conflicting information about the women.

The attack drew condemnation from Pakistani rights activists on social media, with most of them demanding a swift action action against those responsible.

Police said the apparent militants had prior information and were waiting for the women to arrive. Pakistani militants have in recent months stepped up their activities in the region, raising fears they were regrouping in the former Taliban stronghold.

The North and South Waziristan districts served as the main base for local and foreign militants until the military secured the regions in 2015.

The Pakistani Taliban, also known as Tehreek-e-Taliban Pakistan, are a separate insurgent group from the Afghan Taliban, although Pakistan’s militant groups are often interlinked with those across the border.

Monday’s killing of the women came hours before Maj. Gen. Iftikhar Babar, the army spokesman, at a televised news conference said security forces had dismantled terrorism network since 2017, when they launched military operations in the former tribal regions border Afghanistan and elsewhere. He said these military operations resulted into a significant reduction in militant attacks, although occasional violence has continued.

Pakistan and Afghanistan often accuse each other of turning a blind eye to Islamic militants operating along the porous frontier. Babar also said Pakistan’s military will hold its annual parade in Islamabad on March 23 to mark the country’s national day amid improvement in law and order situation.