ISIS terrorist sentenced to life for murder - The Horn News 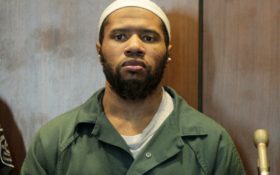 A former Seattle resident who said he was on a “jihad” to avenge U.S. policy in the Middle East has been sentenced to life in prison without parole for killing a college student in New Jersey.

Ali Muhammad Brown apologized to family members of 19-year-old Brendan Tevlin during a rambling statement Tuesday, but added he had “no regrets.”

During a plea hearing on the eve of his trial in March, Brown admitted shooting Tevlin as the college student sat in his car at a traffic light in 2014.

He also acknowledged killing three men in Washington state, and likely will be extradited there to face those charges.

Brown was the first person charged under New Jersey law with terrorism connected to a homicide.