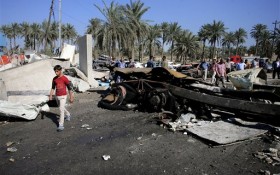 Iraqi officials said on Monday that the death toll from Sunday’s suicide truck bombing south of Baghdad climbed to 61.

Among the dead were 52 civilians, while the rest were members of the security forces, a police officer said. Another 95 people were injured in the attack that targeted a security checkpoint at one of the entrances to the city of Hillah. The officer said that eight other people were still missing.

A medical official confirmed the casualty figures. Both officials spoke on condition of anonymity as they were not authorized to release information.

Hillah is located about 95 kilometers (60 miles) south of Baghdad.

Hours after the attack, The Islamic State group claimed responsibility in an online statement. The Associated Press could not immediately verify the authenticity of the statement, but its language and phrasing is consistent with past IS claims of responsibility.

Iraq has seen a spike in violence in the past month, with suicide attacks claimed by IS killing more than 170 people. Sunday’s bombing was the third massive bombing in a little over a week against security forces and the country’s Shiite majority. These attacks follow a string of advances by Iraqi forces backed by U.S.-led airstrikes, including in the western city of Ramadi.

The latest push could be seen as an attempt by IS to stage attacks deep behind the front lines in order to wreak havoc and force the government to overextend its forces. Hillah is in the country’s mainly Shiite south, far from the front lines of the war against IS.