ISIS recruit asked Trump if she could come back home. He said... - The Horn News 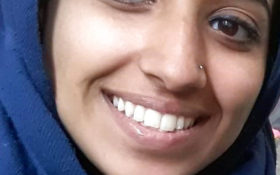 An Alabama woman who joined the Islamic State group in Syria has decided she wanted to quit the terror group and asked President Donald Trump if she could come back to the United States.

Hoda Muthana won’t be allowed to return to the United States with her son because she is no longer an American citizen, the Trump administration said.

But Hassan Shibly, a lawyer for the woman, insisted Muthana was born in the United States and had a valid passport before she joined the Islamic State in 2014.

He says she has renounced the terrorist group and wants to come home to protect her 18-month-old son regardless of the legal consequences.

“She’s an American. Americans break the law,” said Shibly, a lawyer with the Council on American-Islamic Relations (CAIR). “When people break the law, we have a legal system to handle those kinds of situations to hold people accountable, and that’s all she’s asking for.”

Muthana and her son are now in a refugee camp in Syria, along with other former ISIS loyalists who fled the failing terror group.

Trump said Wednesday on Twitter that he was behind the decision to deny her entry, tweeting —

I have instructed Secretary of State Mike Pompeo, and he fully agrees, not to allow Hoda Muthana back into the Country!

The announcement came a day after Britain said that it was stripping the citizenship of Shamima Begum, a 19-year-old who left the country in 2015 with two friends to join the Islamic State and recently gave birth in a refugee camp.

Muthana’s lawyer said she was “just a stupid, naive, young dumb woman,” when she joined ISIS.

Shibly said she left Alabama and made her way to Syria, where she married an Islamic extremist soldier. After he was killed fighting American-backed forces, she married another terrorist, the father of her son.

After her second husband was also killed she married yet another Islamic terrorist. But, her lawyer says, she “became disenchanted with the marriage,” and decided to move to a refugee camp.

Her lawyer says he’ll fight the Trump administration’s decision and intends to file a legal challenge to the decision to deny her entry to the country.

The State Department declined to disclose details about her father or Muthana’s case, citing privacy law.