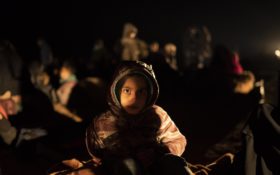 As defeat looms, militants of the Islamic State group have remained organized and ruthless to their last breath. Keeping institutions functioning in their last shred of territory in Syria, they have continued benefits like food and money to supporters while their religious police and fighters still impose their rule of fear and brutality.

Refusing to surrender, the militants have tried to squeeze out any last possible gain. Over the past weeks, they secured the evacuation of more than 10,000 of their exhausted and wounded followers, looking to ensure long-term survival and continued conflict.

The militants — many of them foreigners, including Iraqis and Central Asians, along with some Syrian fighters — are now fighting their final battle, holed up in tunnels and caves inside Baghouz, the last village they control. Since Friday, they have put up desperate resistance to renewed pounding by the U.S.-backed Syrian Democratic Forces aiming to take the tiny pocket on the Euphrates River near the Iraqi border.

Around two dozen evacuees described the group’s final days to The Associated Press. They spoke of how ISIS’s once powerful institutions that administered the provinces of the so-called “caliphate” withstood the pressure as fighters focused on maintaining control. All those who spoke with the AP asked to keep their identity concealed, fearing reprisals from ISIS or punishment for their connections to the group.

The evacuees, most of them relatives of ISIS members, include shattered families that lost loved ones and wounded, exhausted and hungry men, women and children — but some remain die-hard believers, angry and broken, and potential seeds for an already burgeoning insurgency in a country whose social fabric is in shreds.

Widows said monthly stipends from the group were replaced by food handouts, though distribution became less and less regular as food became scarce. They continued to live together in ISIS-administered guest houses even when the militants moved into tents. Money transfer offices worked until the last days. Bayan a 24-year-old Syrian, said her mother wired money from Aleppo a month ago to help her after her husband was killed.

The militants kept up their physical punishments. They killed a senior Iraqi leader for helping people escape their pocket. The ISIS religious police, known as the “Hisba,” drove around the tent encampment inside Baghouz, urging its residents to perform prayers five times a day. When it was time for evacuations, the Hisba oversaw the operation, calling on the wounded and families to register.

A driver named Khodr in one of the convoys of trucks waiting at Baghouz to ferry out a batch of evacuees last week got a first-hand look at ISIS’s organization and brutality. During the operation, masked ISIS gunmen stood at alert, two at each truck, while another militant walked among the evacuees, checking names against a list, he told the AP.

Suddenly the orderly scene was disrupted. A gunman lashed out at a woman, striking her with what appeared to be a Taser. Khodr couldn’t see why — perhaps she had been confused and hesitated to board, perhaps she argued. Crying and panicking, she fell to the ground and plunged her hands in the sand, trying to ease the pain. When she didn’t get up, the gunman fired his automatic weapon into the ground near her, until she stood and boarding resumed.

“It was a terrifying scene,” he said. “He hit the woman from a distance, maybe two meters away, pssht, just like that. She fell, and I started to cry.”

In a leaked audio recording from inside Baghouz, an ISIS leader who describes himself as responsible for logistics explains to a gathering of supporters how the evacuation would look, organized from one side by ISIS and from the other by SDF. He stressed the evacuation would protect their dignity and freedom of movement, a sign of the group’s continued outreach to its supporters, keeping up a veneer of consultation with them. The veracity of the recording could not be independently confirmed.

SDF officials have denied they negotiated with ISIS, but a spokesman for the U.S.-led coalition, Sean Ryan, on Wednesday confirmed negotiations were taking place, through which the SDF is “diligently” trying to find out information regarding any hostages held by ISIS.

The evacuation scenes have been apocalyptic.

Nearly every day, hundreds of men and women have straggled out of Baghouz, many visibly traumatized. Some were on crutches, in ambulances or on wheelchairs. Babies and children cried for food. Women, juggling babies on each arm, pulled duffel bags or plastic sacks with a few belongings. Some had lost children or husbands. Some brought out bags of ISIS-created copper and silver coins, clearly hoping to be able to use the caliphate currency one day.

They had been on the move for months, running to stay in ISIS’s crumbling territory as the SDF chased the group from its de facto capital of Raqqa down the Euphrates to Baghouz.

Now outside Baghouz, they lined up for screening by ISIS’s enemy, the SDF, in a reception area in the desert, stirring up dust that coated their clothes. Men lined up separately to be searched and screened by SDF fighters who collected their biometric data.

Um Abdulrahman, a 27-year old mother, said she tried for four days to be evacuated before finally getting a spot on a truck. Her toddler son was killed and she was badly wounded by a mortar strike weeks ago. Her husband, a mosque cleaner, had been afraid to leave. “He was so scared they would kill him,” she said, drying tears in her eyes with a cloth. Finally, they both came out and her husband was undergoing questioning by the SDF.

Um Rayyan, 25, said she remains a supporter but said she was disheartened by the group’s increasing corruption.

“When we first got to the State, everything was orderly. There was no differentiation between Iraqi or Syrian or foreigner,” she said. But in the final year, she said, the ISIS administration was monopolized by Iraqis who favored their own and kept all the jobs.

“I think this is the reason for the failure of the Islamic State … God protected us (from the international coalition.) But when there was corruption inside us, God stopped making us victorious,” she said, speaking while lying on a gurney at a makeshift open-air triage station, being treated by a U.S aid group. She had lost half her arm, and her leg was wounded from an explosion.

A French-Moroccan woman mourned that because of Iraqi domination, other foreigners lost their once privileged status. “We became the rejects,” she said. She insisted that it was because of such corruption that she left Baghouz not because of bombings — “We lived with bombings for four years.”

Aliya, another 27-year old Syrian from Aleppo, said her husband earned a salary of less than $100 a month teaching in mosques, but as conditions worsened, the militants wanted him to work for free “because they had little to offer.” When her husband was killed last month, she couldn’t join the welfare system that guaranteed widows a stipend. Instead she relied on food handouts and reached out to “sisters” for assistance.

“At the end, they only distributed dates to those nursing. I didn’t get any,” she said.

Rana, a 27-year old mother of two, migrated with husband from Egypt to Syria soon after the “caliphate” was declared in 2014. She said their life in Raqqa was the “best of times” — she was able to buy gold for her daughters and the ISIS administration had plentiful resources. After Raqqa’s fall, she and her family retreated with the militants.

She got out of Baghouz with her daughters, 5 and 8 years old, in the last batch of evacuees before the SDF assault began Friday. Her husband, 27, stayed behind and was likely to be forced to fight, she said. Standing in line at the SDF screening, she carried their last pieces of gold hidden under her clothes, a backpack stuffed with a few belongings and a bag of dates given to her by the militants just before she left.

She said she left Egypt and fell out with her family to follow her husband and the dream of Islamic rule — then she pointed to her backpack: “This is all I have left.”

See the photos of the last stand below: 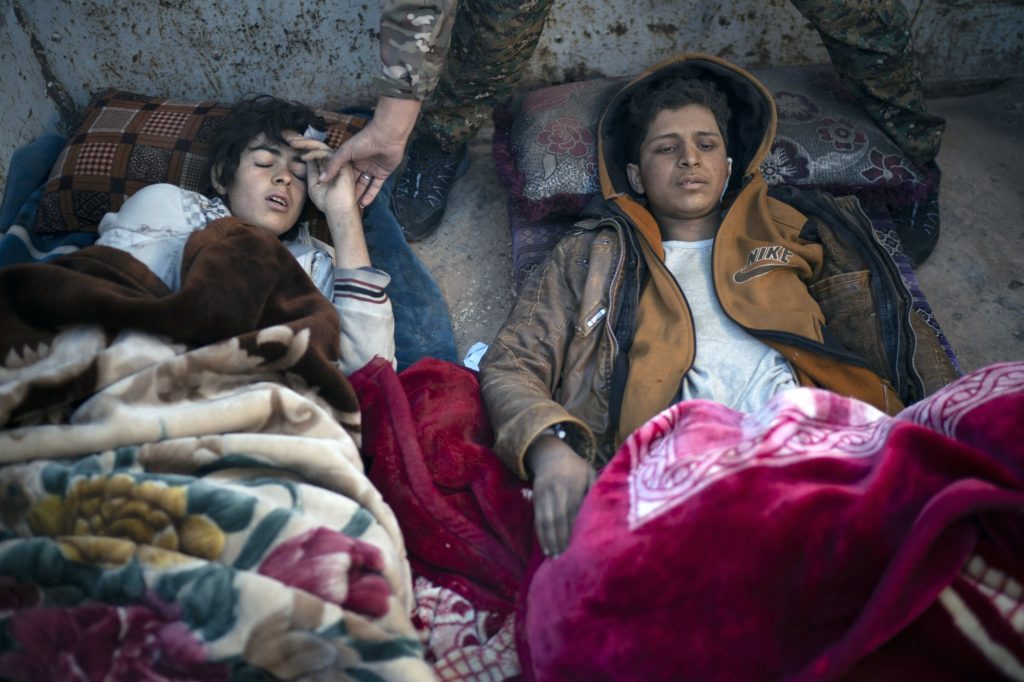 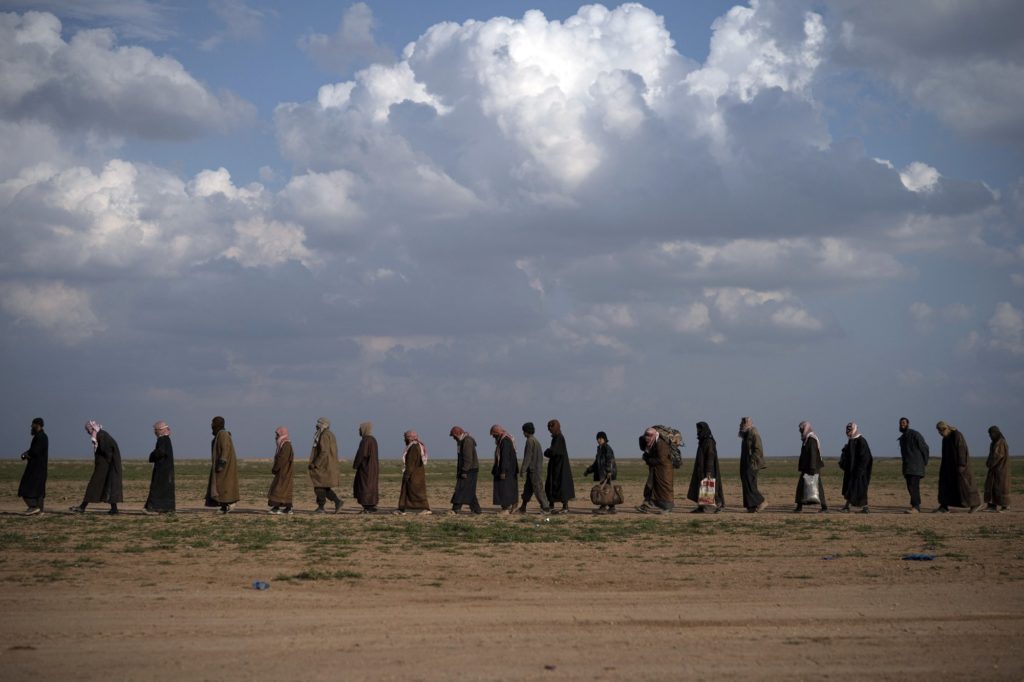 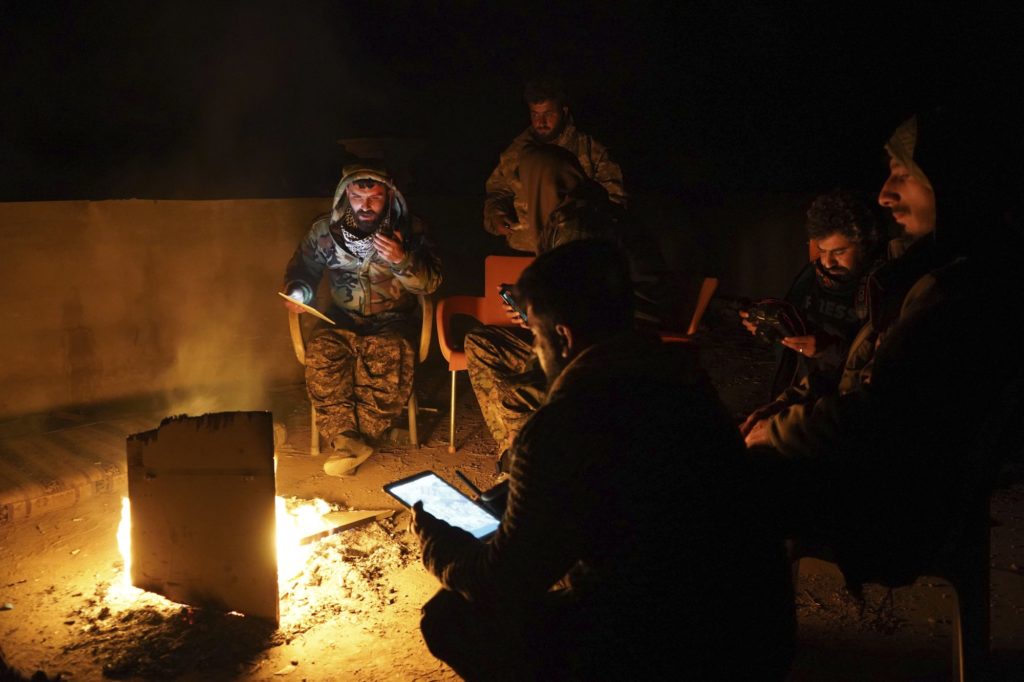 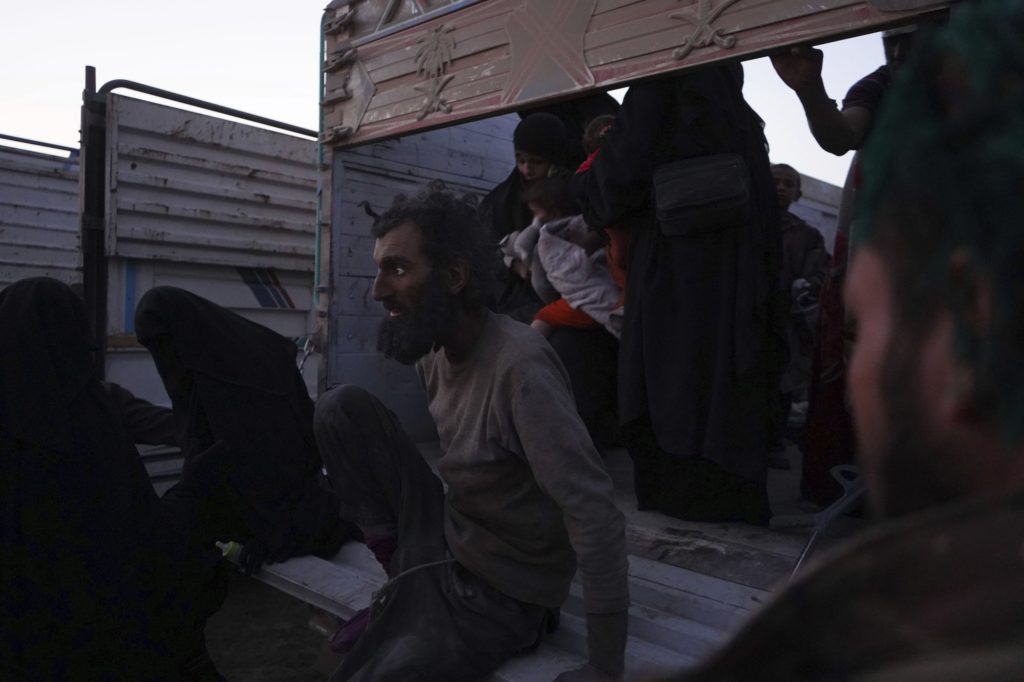 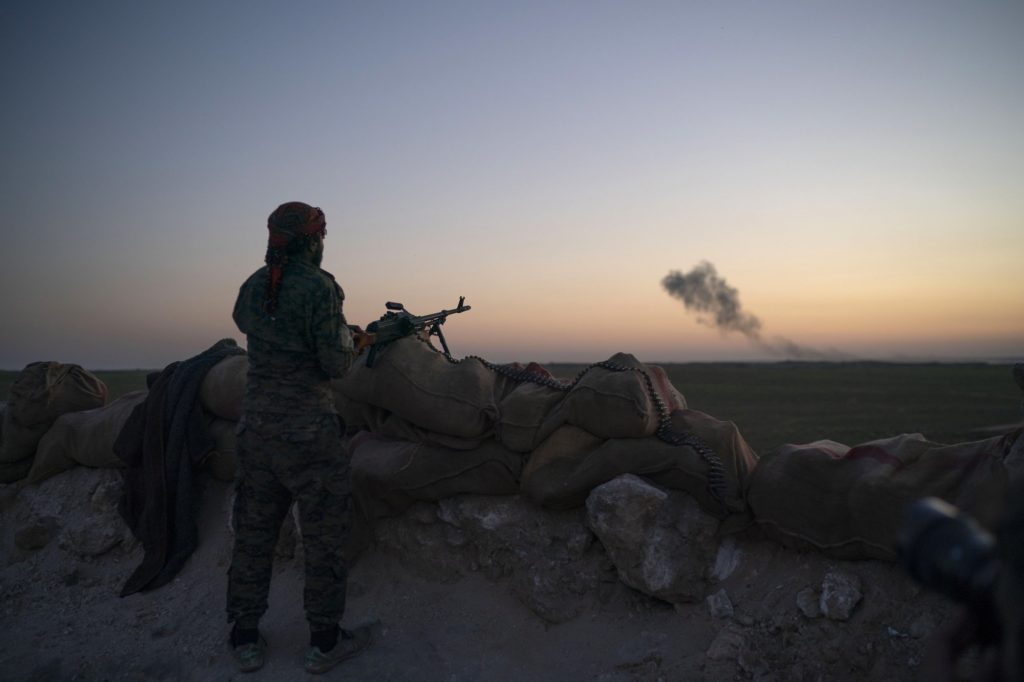 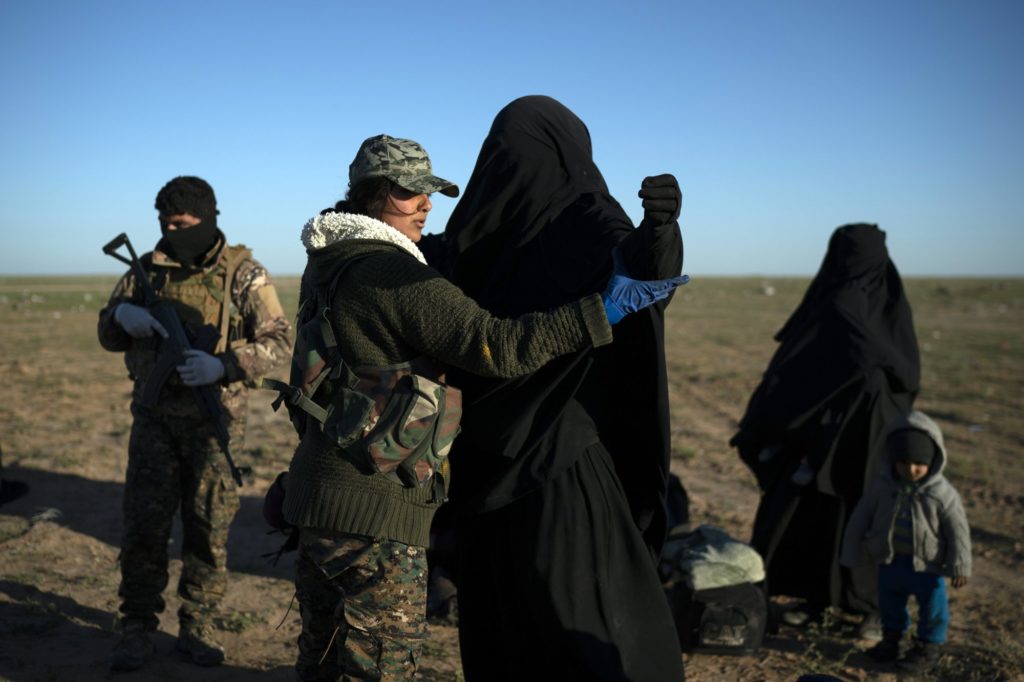 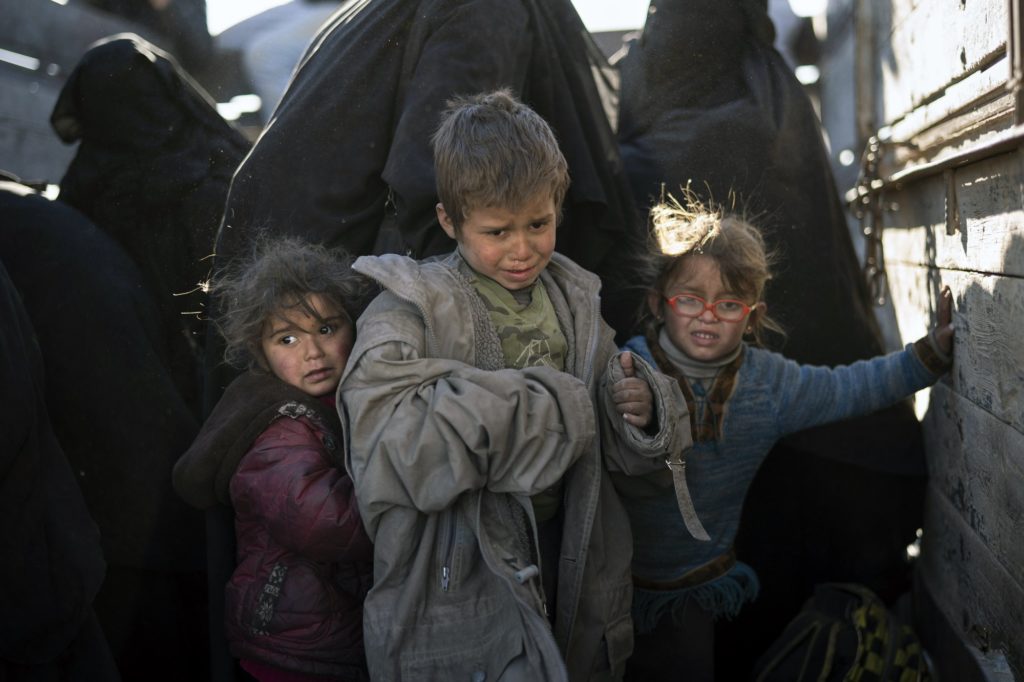 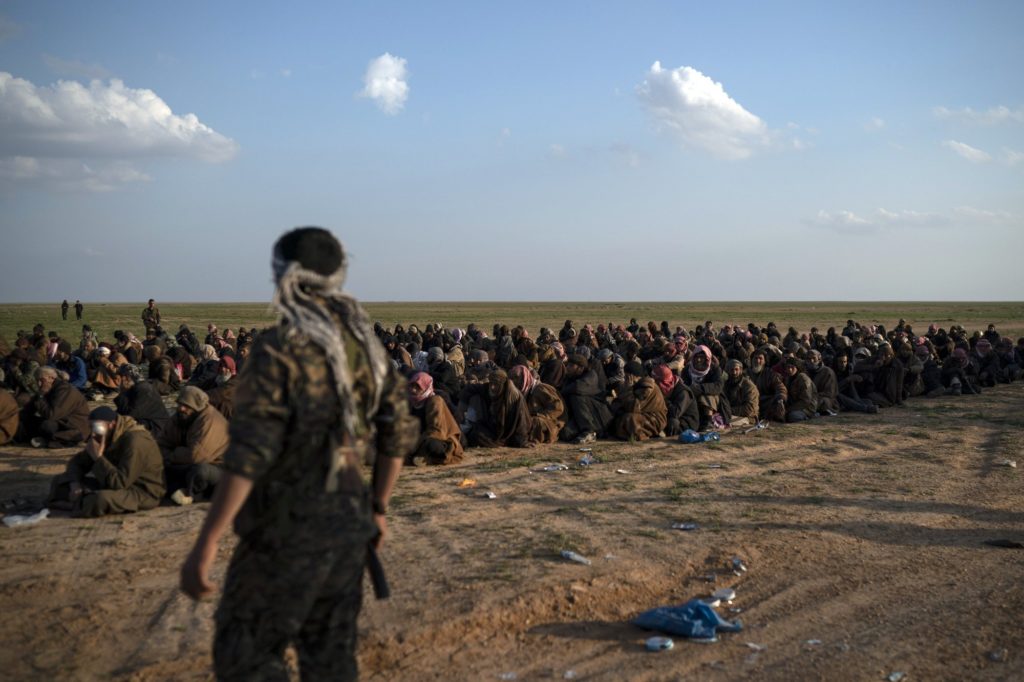