ISIS loses another town to U.S.-backed forces - The Horn News 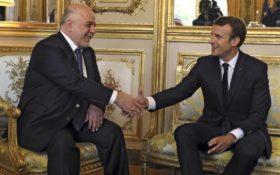 Iraq’s prime minister said Thursday that troops have retaken the northern town of Hawija from the Islamic State group, driving the extremists from one of their last strongholds in the country.

Haider al-Abadi declared victory during a press conference in Paris with French President Emmanuel Macron, who offered to help mediate between Iraq’s government and the autonomous Kurdish region, which voted for independence last week in a move that was rejected by Baghdad and neighboring Turkey and Iran.

“I want to announce the liberation of the city of Hawija today,” al-Abadi said, calling it a “victory not just for Iraq but for the whole world.”

Iraqi forces have driven IS from nearly all the cities and towns it seized in the summer of 2014, including the country’s second largest city, Mosul, which was liberated in July. The extremists are now mainly concentrated in a region straddling the Iraqi-Syrian border, and still control a cluster of towns in the far west of Iraq’s sprawling Anbar province.

Iraqi officials often declare victory before the fighting has completely ended, and the troops in and around Hawija were likely still clearing mines and booby traps, and flushing out remaining militants. Iraqi forces had launched the operation to retake the town, which lies 150 miles (240 kilometers) north of Baghdad, late last month.

Even as it drives the extremists from their last remaining pockets of territory, Iraq faces a new challenge in the form of a growing Kurdish push for independence. More than 90 percent of Kurds voted in favor of independence in a referendum last month that was rejected as illegal by the Baghdad government as well as Iraq’s neighbors.

Iraq has responded to the vote by imposing a flight ban on the northern region, while Turkey and Iran have sent troops to the land-locked region’s borders to signal their opposition to any redrawing of the map.

Macron said France and others are concerned about the escalating dispute. He said France supports the territorial integrity of Iraq and called for “national reconciliation and inclusive governance,” noting France’s close ties to the Kurds.

He said dialogue “is the only path” out of the crisis, and said France is ready “to contribute actively to mediation.”

Al-Abadi insisted that Iraq “is for all Iraqis” and said the constitution guarantees the rights of all its citizens.

“We are not looking for any confrontations, we don’t want animosity,” he said. “But the authority of the federal state should impose its will and no one should attack the federal authority.”

The central government and the Kurds have long bickered over the sharing of oil wealth and the fate of disputed territories that are controlled by Kurdish forces but lie outside their autonomous region.

Iraq’s parliament, which is dominated by Shiite Arabs, has called for harsh measures in response to the Sept. 25 referendum, including sending federal troops to retake the contested, oil-rich city of Kirkuk, which is held by Kurdish forces but claimed by Baghdad. Al-Abadi has ruled out any military response to the Kurdish vote but has said Iraqi forces will respond to any violence.

Al-Abadi and Macron also discussed efforts to promote investment and reconstruction in Iraq, where entire neighborhoods in several cities have been reduced to rubble by the fight against IS, and where more than 3 million people have been displaced.

France confirmed a 30 million euro loan for Iraqi reconstruction, and appears eager to play a big economic role in Iraq’s future. French oil company Total has long been a player in the region and other companies are meeting with Abadi’s delegation in Paris later Thursday.